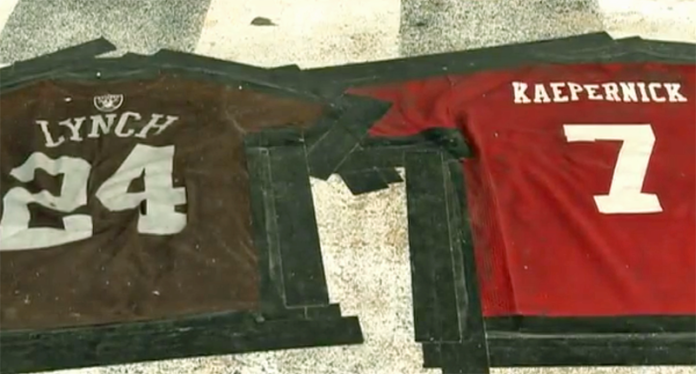 A Missouri bar owner is receiving harsh criticism for a homemade “Lynch Kaepernick” doormat outside his establishment.

Jason Burle, owner of the S.N.A.F.U. Bar in Lake Ozark, ordered Marshawn Lynch and Colin Kaepernick NFL jerseys, which he taped down as “doormats” in a manner that read, “Lynch Kaepernick.”

Burle was angry NFL players are taking a knee to silently and peacefuly protest racism, and police brutality reported KOMU.

Former San Francisco 49ers quarterback Colin Kaepernick started his anthem protest in 2016 and it has been swelling in recent months. After President Trump insulted protesters, there has been a massive increase in kneelers.

“I am not going to stand up to show pride in a flag for a country that oppresses black people and people of color,” Kaepernick said when he started his civil rights protest. “To me, this is bigger than football and it would be selfish on my part to look the other way. There are bodies in the street and people getting paid leave and getting away with murder.”

“It’s not a race thing,” SNAFU owner Burle insisted. “A lot of people want to twist it around to be a race thing.”

Many believe the Missouri bar owner is simply being racist while putting a false face of patriotism on it.

Taylor Sloan, a patron who complained about the message, argued the owner was “expressing hate, violence and continuing American racism under the faux guise of patriotism.”

The bar owner did not suggest lynching any of the white police officers that murdered unarmed black people.

White House Spokespeople No Longer Allowed To Appear On CNN Because It Doesn’t ‘Promote’...

‘The Lord is good’: Indiana Man’s Answer For Why He Caged And Molested 14-Year-Old...