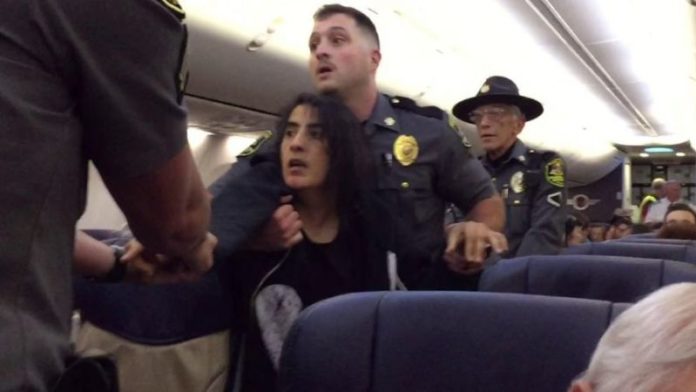 A Baltimore woman was forcibly kicked off of a Southwest flight headed from Baltimore to Los Angeles after she declared that she had a dog allergy.

On the Tuesday night flight, Anila Daulatzai, a professor at the Maryland Institute College of Art, alerted the crew that she had severe allergies to dogs, and asked that an emotional support dog and a pet dog that were on the flight be removed, reported The Root.

Because she did not have a health certificate saying she had the allergy, the dogs were allowed to stay on the flight while the officers dragged her off the plane, even ripping her pants along the way.

Passenger Bill Dumas shot footage of the incident, which was aired by CBS.

“They spent a long time talking to the woman, explaining to her what the situation was, trying to work with her,” Dumas said. “The pilot said they wouldn’t leave until it got resolved.”

“If you look at the police, they were being overly aggressive. Really, she wasn’t giving them much of a choice, and the people on the plane were saying, ‘Just get off the plane,’” he said.

The airline issued an apology to Daulatzai for the way she was treated:

“We are disheartened by the way this situation unfolded and the customer’s removal by local law-enforcement officers. We publicly offer our apologies to this customer for her experience, and we will be contacting her directly to address her concerns.”

Despite the apology, Daulatzai was charged with disorderly conduct, failure to obey a reasonable and lawful order, disturbing the peace, obstructing and hindering a police officer and resisting arrest, said Lt. Kevin Ayd of the Maryland Transportation Authority Police.

Georgia Lawmaker Warns Black Attorney She ‘may go missing’ If She Tries To Remove...