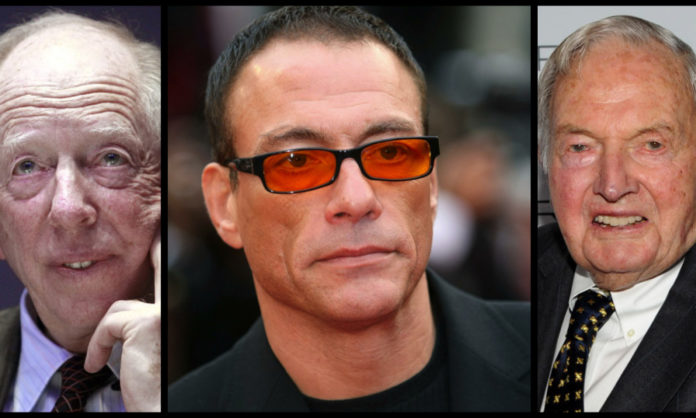 The world was not expecting Belgium actor and former bodybuilder Jean-Claude Van Damme to go off-script during a live interview on French TV, but he did exactly that. As you’ll view in the video below, Damme took his time discussing how the Rothschilds and the Rockefellers actually control the world – a fact few people are aware of!

Commenting on the election in the United States – what might eventually be regarded as the 2016 fiasco, Jean-Claude said that neither Ted Cruz or Donald Trump would win the race. He reasoned:

You still have the Rockefellers, people like the Rothschilds, those big families that dominate continents…these are families that rose in 1827, a family with five sons that expands, it’s above everything we’re talking (about) tonight.

He additionally warned that “globalists” were the problem and that “to get out of globalism is to leave the world alone,” relays Educate Inspire Change.
For years, conspiracy theorists have proclaimed that the families are among the few that control the majority of the wealth and resources in the world. And, the following documentary aims to validate this conspiracy. It’s mind-numbing, to say the least:

According to the Wall Street Journal, the Rothschilds held a $100,000 a plate fundraiser earlier this year for Clinton. If that doesn’t speak of vested interest in seeing her become the next President of the United States, what does? In addition, leaked emails from the former Secretary of State’s server reveal her admiration of the power elite.

As people numb themselves with low-quality food, reality TV, and a variety of socially acceptable addictions, at least activists like Van Damme are speaking out in an attempt to raise awareness about the globalist agenda.

Flint Residents Now Have To Pay For Water They Still Can’t Drink – Anti...