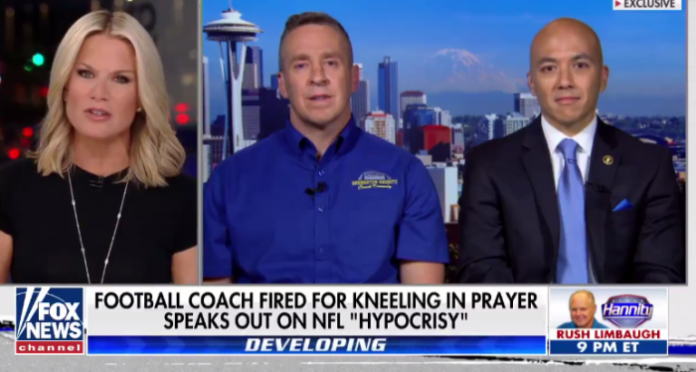 A High school football coach who was fired for kneeling after games to pray questions: ‘Why Don’t I Have the Same Rights as Kneeling-Protesters?’

Coach Joesph Kennedy of Seattle Washington led post-game prayers on the field, but the Bremerton School District ordered him to stop in 2015, saying “the practice violated the separation of church and state required by the U.S. Constitution. ” He later lost his position after he defied the ban.

Kennedy believes his first amendment rights were violated and that there is a double standard: essentially if Kaepernick can kneel, why can’t he?

This is powerful.  The Federalist explains a significant double-standard as it applies to kneeling on the football field:

You probably know where this is going.  The School District took the free speech rights away from Coach Kennedy by forbidding “free association to the coaches, players, students, and parents who wanted to join” in prayer. Kaepernick, however, is now a hero — he can kneel anytime he wants to, apparently.

The problem with Kennedy’s argument is that his firing was based upon him being a public employee, not a and it is a Church and state argument. The former coach is allowed to worship as he pleases but must do so in private out of view from those in the stands. He somehow thinks that he is above this rule and to compare himself as a privileged white male to be fighting for the same rights as Kaepernick for equal rights is a slap in the face to social justice everywhere. What he is also failing to see is that kneeling protesters have the same consequences as he does, Kaepernick no longer plays in the NFL due to no volition of his own.

Joe Kennedy’s prayers were not found to constitute protected free speech by a  three-judge panel of the 9th U.S. District Court of Appeals “because he was acting as a public employee, not a private citizen, when he conducted them.”

“By kneeling and praying on the 50-yard line immediately after games while in view of students and parents, Kennedy was sending a message about what he values as a coach, what the District considers appropriate behaviour, and what students should believe, or how they ought to behave,” Judge Milan Smith wrote for the court.

The judge added that Kennedy “took advantage of his position to press his particular views upon the impressionable and captive minds before him.”

Watch Coach Kennedy discuss what he believes to be a double standard in the video below and share your thoughts in the comments section.

“I just want the same rights as everybody else” —Coach Joe Kennedy, who was fired for kneeling in prayer post-games, addresses @NFL protests pic.twitter.com/0F4ckVlayi

Texas Police Chief To Miss Black Texas US Ambassador Before Having Her Arrested For...