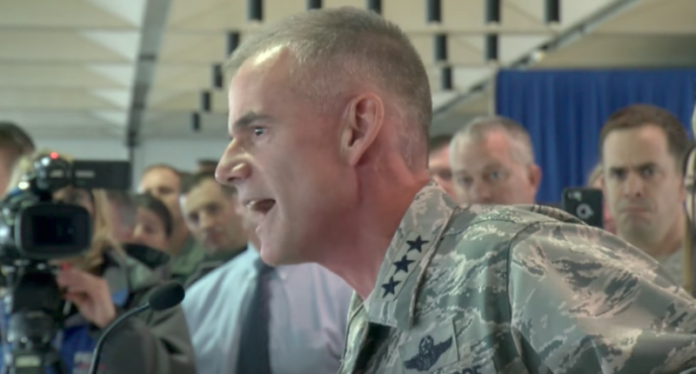 This Lt. General isn’t going to allow the racism that has become so widespread in the U.S., even if the commander in chief seems to support and fuel the racism.

Lt. Gen. Jay B. Silveria, superintendent of the Air Force Academy Preparatory School, addressed cadets on Thursday in a powerful speech about treating one another with “dignity and respect” after racial slurs were written outside five black Air Force cadet candidates’ dorm rooms, reported Elizabeth Preza of Raw Story.

“There is absolutely no place in our Air Force for racism,” Silveria told the Air Force Times, adding, “I‘ve said it before: the area of dignity and respect is my red line. Let me be clear, it won’t be crossed without significant repercussions.”

In a speech to Air Force cadets Thursday, Silveria addressed the incident by denouncing racism–something our president has been unable to do. He demonstrated the kind of moral clarity one would expect from a good leader.

“You should be outraged not only as an airman, but as a human being,” he added.

Watch the amazing speech below:

Oklahoma Just Passed The Most Oppressive Law Against Women In History

Equifax Executives Sold $1.8 Million In Stock Before Cyber Hack Was Disclosed To Public

Cop Found Not Guilty After He Jumped On Hood Of Car And Murdered Unarmed...