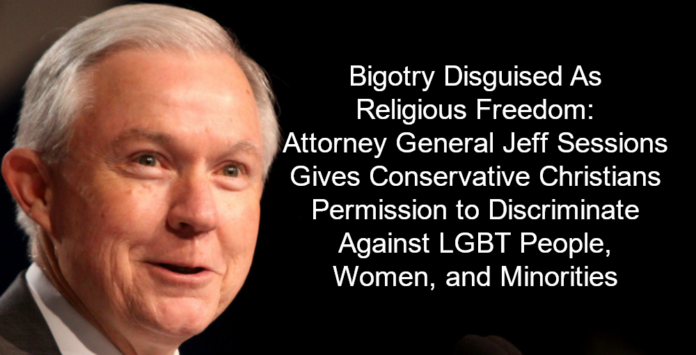 Under the new policy, a claim of a violation of religious freedom would be enough to override many anti-discrimination protections for LGBT people, women and others. The guidelines are so sweeping that experts on religious liberty are calling them a legal powder-keg that could prompt wide-ranging lawsuits against the government.

A preliminary analysis of the Trump-Pence administration’s license to discriminate indicates that LGBTQ people and women will be at risk in some of the following ways:

Today the Trump-Pence administration launched an all-out assault on LGBTQ people, women, and other minority communities by unleashing a sweeping license to discriminate. This blatant attempt to further Donald Trump’s cynical and hateful agenda will enable systematic, government-wide discrimination that will have a devastating impact on LGBTQ people and their families. Donald Trump and Mike Pence have proven they will stop at nothing to target the LGBTQ community and drag our nation backwards. We will fight them every step of the way.

Today’s guidance by Jeff Sessions proves this Administration will do anything possible to categorize LGBTQ Americans as second-class citizens who are not equal under the law. Freedom of religion is paramount to our nation’s success but does not give people the right to impose their beliefs on others, to harm others, or to discriminate. Nothing could be more un-American and unholy than using religion to justify harm and discrimination to others.

In short, the new guidelines from the Trump administration are despicable. They are an open invitation to discrimination against women, members of the LGBT population, and others, all in the name of “religious freedom.”

The despicable new guidelines will allow taxpayer funded federal agencies, government employees, and government contractors to legally discriminate against anyone as long as they cite a sincere religious belief as a justification for doing so.

Bottom line: Our long national nightmare continues, and the theocrats are winning.