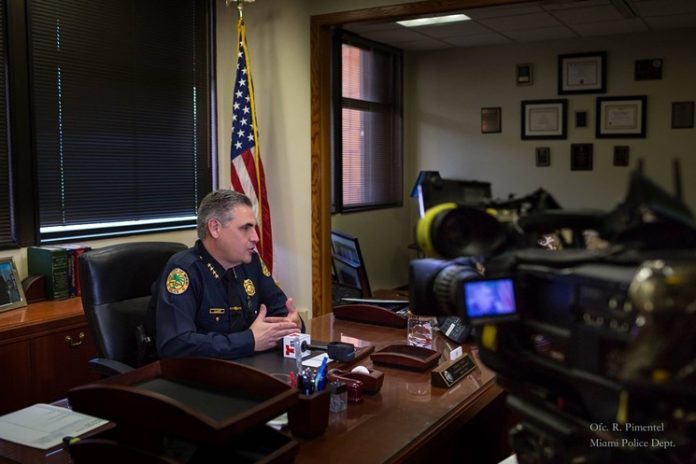 Miami SWAT Officer George Diaz shot up a moving car outside Club Space  with a submachine gun in 2011. This case should have been a no-brainer for internal affairs because Miami cops aren’t allowed to shoot into moving cars due to the possibility they could cause an accident or hit innocent people inside the vehicle.

According to documents obtained by The Miami New Times this week, Diaz wasn’t reprimanded for his actions until this past August, more than 6 years after he shot up a silver Mercedes-Benz E350 with his department-issued MP5 submachine gun. The department has now suspended the cop for 16 days, though he’s appealing the ruling.

“We received declination of prosecution from the State Attorney on 9/12/2016,” Llanes tells New Times in a text message. He says MPD moved relatively quickly after that. By March, internal affairs finished its investigation and presented its case before MPD’s Firearms Review Board, which judges whether cops fired their guns legally.

“Discipline was issued after that based on board findings,” Llanes says.

This case is not Diaz’s only controversial shooting incident.

Prosecutors declined to charge him with a crime when he and a team of fellow cops fired 27 bullets into a man holding a box cutter, killing him in November 2009. Diaz and another cop, Omar Ayala, refused to speak to state investigators in that case.

Rundle’s office has a bad history of failing to prosecute police that break the law.

Miami New Times reported in June that Rundle’s office regularly lets shooting-by-cop cases remain open for years — until witnesses vanish, leads go cold, and statutes of limitations for various crimes expire. As of June 15, the Miami-Dade State Attorney’s Office had 59 open police-shooting cases, and 24 of those incidents were older than two years.

Local defense attorneys, justice advocates, and even police chiefs have complained about the backlog, which has existed for the majority of this decade. As long as a case remains open, prosecutors typically prevent lawyers or IA investigators from speaking to witnesses or obtaining evidence from the case file.

The New Times reported on the details of Diaz’s case:

According to police disciplinary documents, the trouble began July 18, 2011, when Miami-Dade County Police located what they said was a stolen Mercedes sitting outside Club Space. MDPD asked City of Miami cops for help, and Diaz, along with two other MPD officers, arrived. At roughly 3 a.m., “three male subjects” approached the vehicle. One of the officers immediately arrested a suspect, but the other two jumped into the car and sped off.

Police documents claim the drivers pointed the Mercedes “in the direction of” the cops “at a high rate of speed.” But bullet markings suggest Diaz didn’t fire until the car had passed him. Police documents say his shots hit the “side and rear” of the “fleeing vehicle.” An unarmed suspect in the passenger seat was shot in the leg.

According to news reports at the time, the car ended up crashing head-on into a wall.

“The front of a silver-gray Mercedes-Benz E350 was buried halfway inside a vacant building at Northwest Seventh Avenue and 20th Street — back tires off the ground as it went airborne, straight in,” the Miami Herald wrote the following day. “The impact cracked the pavement along the curb and left a gaping hole in the building’s side.”

It’s unclear whether the car crashed because Diaz shot at the driver, but the outcome is exactly why MPD bars its cops from firing at moving vehicles.

Rundle’s office failed to give any legitimate explanation as to why the case sat open for 5 years, but on March 6, after Rundle finally decided not to charge Diaz, the Firearms Review Board came down on the cop, ruling that his shooting violated clearly written departmental policy.

“Officer George Diaz had a reasonable amount of time to remove himself from the moving vehicle’s path,” disciplinary documents state. MPD issued Diaz a formal reprimand in May. Llanes then ordered him suspended without pay for 16 nonconsecutive days beginning August 6.