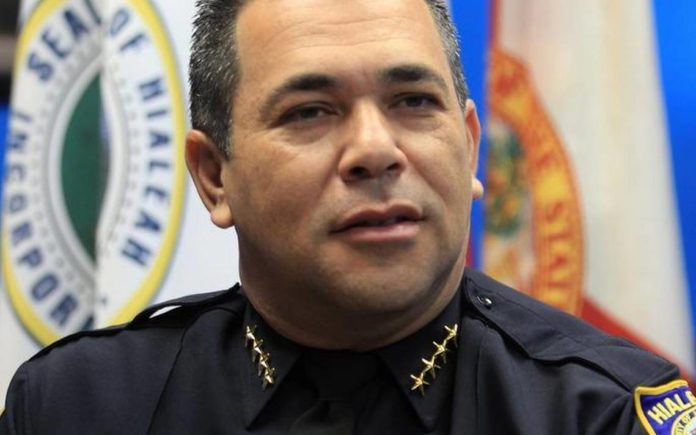 In June 2015, a 17-year-old girl told multiple news outlets that Hialeah, Florida Police Sgt. Jesus “Jesse” Menocal Jr. threatened to sexually assault her while he was on-duty. The police department has basically chosen to lie to the public about the non existent suspension for the officer while they aren’t even doing an actual investigation.

The teen told multiple media outlets that Menocal arrested her for making an illegal U-turn, cornered her in a Hialeah Police station, and demanded she remove her bra and shorts or she “was going to get arrested.” The teen told CBS Miami that Menocal rubbed his genitals through his uniform while making his demands and asked if the teen “was a virgin.”

The girl, who was not named due to her age and the nature of the claims, said Menocal ultimately released her after she took her shorts off. Hialeah Police told reporters that Menocal had been suspended with pay as of June 14, 2015, the day the department received a complaint about the incident.

But Hialeah Police spokesperson Carl Zogby now says that Menocal was “never suspended” and, after a stint supervising the police academy, is now back on patrol. That’s despite the fact that two years later, Hialeah’s internal affairs department still hasn’t closed an investigation into the teen’s disturbing allegations, reported The Miami New Times.

“Sgt. Menocal was never suspended, but the IA case is not closed, thereby not available for public records release yet,” Zogby says via email. “He is back on patrol, and that is an operational needs decision.”

It’s unclear why Hialeah PD said the officer was suspended when he wasn’t. In 2015, CBS Miami reported the officer had been taken off duty and that the department confiscated Menocal’s gun and towed his cruiser.

But this past Monday, Zogby said any news reports claiming Menocal was suspended were “inaccurate.”

“There was no suspension that I am aware of,” Zogby said via phone yesterday afternoon. Zogby did not respond to multiple follow-up messages about his own contradictory statements in 2015.

Given that the so-called IA investigation into Menocal’s conduct has now stretched for more than two years, it would be extremely difficult for the department to punish him even if investigators determined the girl was telling the truth. Under the Florida Law Enforcement Officers’ Bill of Rights, if an IA probe takes longer than 180 days to complete, the officer in question cannot be punished. (The 180-day count pauses if prosecutors have an open investigation into an officer’s conduct.)

The New Times noted the incident also raises questions as to why Miami-Dade County State Attorney Katherine Fernandez Rundle, who regularly lets police-misconduct cases stretch out for years, has not charged Menocal with a crime for his alleged actions. Hialeah Police said they were sharing information about the case with Rundle’s office two years ago.

After arresting her in 2015, Menocal allegedly walked the victim into the police station and locked the teen in a room with him — alone.

“He asked me if I was a virgin,” the victim told CBS. “He asked me how I have intercourse with my girlfriend. I told him I don’t know. Why? I don’t think that’s important.”

The teen said Menocal then demanded she take off her pants or face arrest. He also allegedly asked “to see her behind” and if she was on her period. After she put her shorts back on, Menocal asked to “see her tattoos.” And, she claimed, he demanded she take her top off.

After that, Menocal let her go, she said.