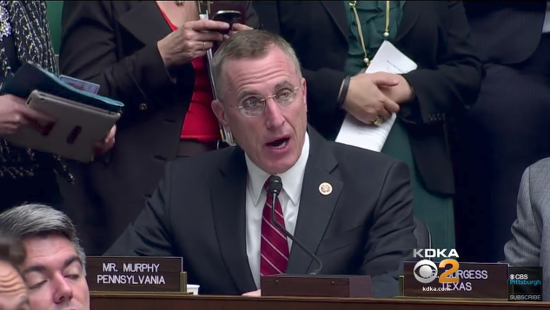 To the public is his quick to condemn women’s right to choose, but behind closed doors and in his personal life he holds a much different stance, because apparently if the unborn child is that of his mistress, he is more than okay with dead babies.

After having to post a scathing anti-abortion pot on social media, Murphy’s mistress confronted his hypocrisy of having asked her to have an abortion should she have fallen pregnant.

Rep. Tim Murphy of Pennsylvania, a “family values” Republican who has been a frequent opponent of abortion in public and serves on the House Pro-Life Caucus, apparently has a much different stance in his private life: he asked his mistress to get an abortion amid a pregnancy scare.

According to the Pittsburgh Post-Gazette, the woman with whom he was having an affair confronted Murphy via text after he posted something publicly against abortion.

“And you have zero issue posting your pro-life stance all over the place when you had no issue asking me to abort our unborn child just last week when we thought that was one of the options,” Shannon Edwards, a forensic psychologist in Pittsburgh with whom the congressman admitted last month to having a relationship, wrote to Mr. Murphy on Jan. 25, in the midst of an unfounded pregnancy scare.

Murphy blew off Edwards by saying that he was not the author of the post, but did recognize that his stance was hypocritical implying he’s not really anti-abortion, but does so in the public eye.

A text from Mr. Murphy’s cell phone number that same day in response says, “I get what you say about my March for life messages. I’ve never written them. Staff does them. I read them and winced. I told staff don’t write any more. I will.”

Murphy implies that he is not really against abortion, that it’s just something his team writes, but is that really the case? The fact is that he has repeatedly spoken out against, and most importantly voted against, anything that has to do with abortion.

According to his website, Murphy, a Catholic, was presented with the “True Blue” award from Family Research Council for his legislative “victories” against abortion.

Last session, Mr. Murphy voted for legislation offered by Rep. Marsha Blackburn (R-TN) to delay implementation of the Affordable Care Act (ACA). Her legislation also included legal conscience protections for those medical professionals who have moral objections to abortions or related services. Congressman Murphy also backed the Pain-Capable Unborn Child Protection Act, which prohibits abortion after 20 weeks of gestation when a baby can feel pain, and the No Taxpayer Funding for Abortion Act.Last month, Mr. Murphy joined his House of Representatives colleagues in advancing legislation that prohibits federal tax dollars from being spent on abortions. The No Taxpayer Funding for Abortion and Abortion Insurance Full Disclosure Act of 2015 (H.R. 7), which passed the House by a vote of 242-179, prohibits the use taxpayer dollars to pay for a procedure that runs counter to the faith of many. H.R. 7 has been referred to the Senate where it awaits further action.

If he’s not really against abortions, he has an awful way of showing it. Or maybe he’s only against abortions for everyone except himself. If it helps hide his affair, then an abortion is just fine, but if a woman might die in childbirth, she can fend for herself.

Murphy isn’t alone in his world of religious hypocrisy. He is only the most recent anti-choice conservative Republican shown to live a double life. He won’t be the last. The only question is whether his base will vote him out of office for his lies — if he doesn’t resign before they get a chance. Do they care about the obvious hypocrisy or, as with Donald Trump, will they let everything slide as long as their guy continues to vote the way they want him to?

What do you think should happen to Murphy now that he is exposed for who he really is? His life work is to strip away the rights of women to have bodily autonomy, but when those rights need to be exercised by his mistress and directly impact his life- suddenly he is all for it.