Home News Salt Lake City Police Chief Has Yet to Decide Whether to Discipline... 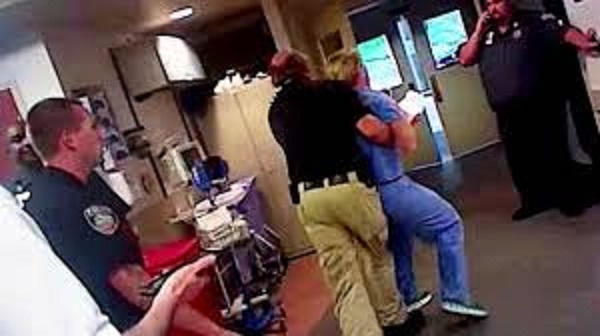 More than three weeks after an internal affairs investigation concluded, Salt Lake City Police Chief Mike Brown continues to examine what should happen to two officers involved in the July 26 arrest of a nurse at University Hospital.

The officers, Detective Jeff Payne and Lt. James Tracy, were allowed 20 days to respond to the results of the internal investigation into their actions, the results of which were delivered to them Sept. 13.

Brown was considering Friday — several days after the 20-day window closed — what, if any, disciplinary action to take against the officers, department spokeswoman Christina Judd said. Payne and Tracy could face consequences as severe as termination. Judd did not say when a decision by the chief might be finalized.

Mayor Jackie Biskupski previously said there was no time limit for Brown to make a decision.

Payne’s attorney, Jeff Skordas, said Friday that he and his client attended a hearing with department officials about two weeks ago to give Payne’s side of the story. He said Brown did not attend the hearing; instead, a police captain who authored the report and a city attorney met with them. Skordas said he expected Brown to make a decision “soon.”

Payne aggressively arrested nurse Alex Wubbels after she refused to allow him to obtain a blood sample, citing hospital policy, from an unconscious patient injured in a fiery crash in Cache County. Tracy was Payne’s supervisor the night of July 26 and went to the hospital when Payne encountered challenges obtaining the blood. The encounter was captured on police body cameras, and the footage caused a national uproar after it was released by Wubbels’ attorney about a month later.