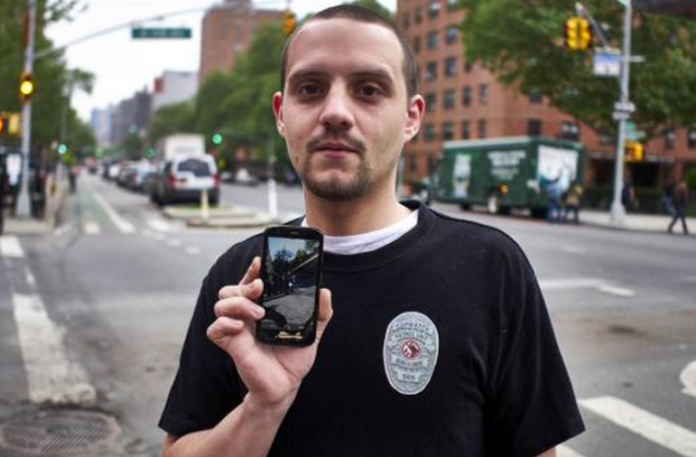 NEW YORK, NY — It appears the NYPD is getting a lot of self-imposed negative attention again.

It all started when Michael Barber, a member of Cop Watch, filmed two plainclothes police officers grabbing a young girl in public.

The video sparked outrage, and many accused the officers of harassing the minor.

Witnesses can be heard in the video shouting at the officers to leave the teenage girl alone.

After the pressure from the crowd built up, the officers can be seen scurrying back to their unmarked vehicles and fleeing the scene, yelling obscenities at the young girl as they take off.

“I was surprised that things didn’t get worse,” Michael Barber said.

“I believe he was wrong from the very beginning and that’s why he didn’t call it in,” he added.

But now it appears that things have gotten worse.

On an NYPD 30th Precinct Facebook Page — which describes itself as a “government organization” — Michael Barber’s picture was posted publicly.

The page commented on Michael’s picture with the following: “F*ck these Savages They should all die a nice slow death!”

As of the time of this writing, the content is still up, but we’re guessing they’ll pull it down as this news spreads.

Here’s a partial screen capture of the original post with the 30th Precinct’s death-wish:

As the video and the death-wish on Americans who film cops continue to go viral, we guess the NYPD will be issuing a statement soon with the typical jargon about how they’re going to “investigate” themselves.

If this is what police truly feel about Americans who want them held accountable, it could explain why so many police have been opening fire on innocent citizens lately. It appears that they’re looking for any reason to take out that gun and kill us “savages.”

Now more than ever, it’s important to film them at every opportunity — try to always be in groups of two or more, with multiple cameras live-streaming to the internet, in case these officers ever act upon their evident blood lust. (Download a free copy of our Advanced Strategies for Filming Police for more specific info on how to live-stream your footage to the internet.)