Home News This White Cop Slamming a Little Black Boy to The Ground is... 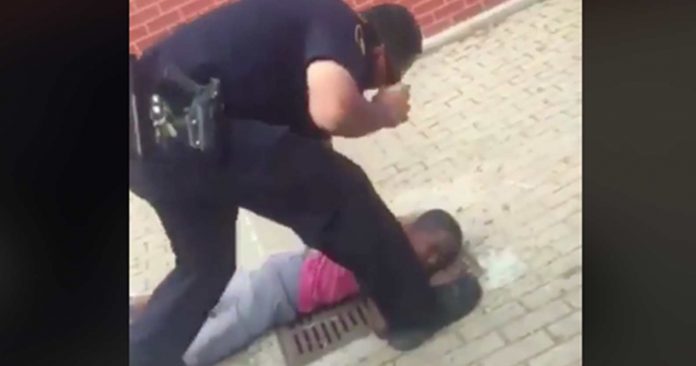 For example, two days ago a video surfaced of a school cop breaking up a fight between two kids, one black, one white. The officer, at least one foot taller and over one hundred pounds heavier than the two sixth graders, somehow couldn’t separate the two without slamming one kid to the ground. Guess which one? Hint: Not the white one.

And just to make sure we all got the message, he only drags one kid off the playground. Want to take another guess which one? Yeah, you don’t really need to. The white kid might as well have been completely invisible to the police officer because he’s white and white kids are the “good” kids. Meanwhile, you just know how those black kids are. There’s a reason they get suspended and expelled from school far more often and there’s no way it has anything to do with institutional and systemic racism, no sireebob!

Angry white people will protest (get it?) that a kid being manhandled by a school cop is not the same thing as unarmed black men being killed by the police. First, thanks for acknowledging it’s happening. You know what they say about the first step. Second, are you sure about that? Are you sure that the casual disregard and disrespect for black skin in both cases aren’t precisely the same?

If You See THIS Label On the Fruit Do Not Buy It at Any...