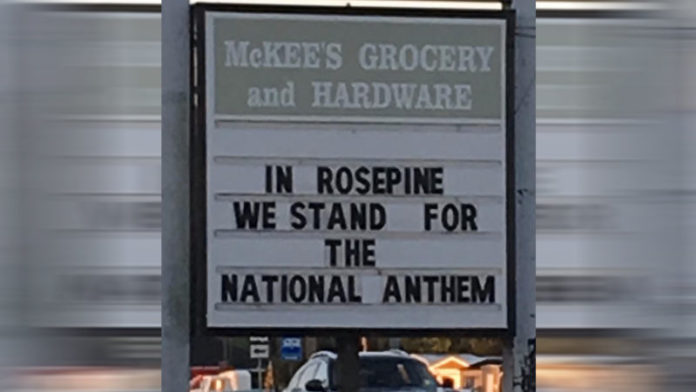 When students from a majority-black Louisiana school decided to kneel while the national anthem played at a predominantly white high school’s homecoming football game, opposing fans, and even a referee, booed the students and used racial slurs, according to multiple people in attendance.

If you’ve ever wondered “Where they do that at?” when you hear about the places where they run the Negroes out of town for being too black, you’ve never been to Rosepine, La. In Rosepine, they love Jesus, Trump, troops and flags (both the Confederate and star-spangled variety).

Black people? Not so much.

According to a story in Pen Point News and The Root’s reporting, when the mostly black North Central Eagles took the field against the majority-white Rosepine Eagles, at least one of North Central’s African-American players had already decided to kneel during the playing of the national anthem to protest racial injustice.

One of North Central’s students wrote on his Twitter account days before playing at Rosepine: “even myself being a young man i know about injustice that goes on in this country, which is why i TakeTheKnee before every football game.”

That student, away from home, playing against a majority-white town, watched the Rosepine players burst onto the field for homecoming carrying American flags, and as the Rosepine team played the national anthem, he stuck to his convictions and took a knee.

That did not sit well with the Rosepine crowd.

Maybe I should mention how much the people of Rosepine love the flag, again. It’s a little bit creepy. In researching this story, I checked out half the townspeople’s social media and spoke to several people in Rosepine. I mean, it borders on pornographic. Is there such a thing as “flagophiles”? People who want to make sweet love to the Stars and Stripes? Seriously, y’all, the way they talk about the flag, you’d think it had titties or something.

During the second half of the game, the student who took a knee said a referee told him to “not come back, nigger.” He said he immediately went to the sidelines and informed his coach. One of the North Central parents in attendance said that after the game, people in the Rosepine crowd followed the team to the bus, hurling racial slurs, including “bitches” and “niggers,” and throwing rocks at the bus as they drove off.

After the game, one of the teenagers who knelt during the anthem wrote the following on Facebook:

[I]n Rosepine, La i experienced racism first hand and it was from a referee, what i was told was to “not come back nigger” only hearing about it, i never experienced that and didn’t know what to even say, of course i informed my coach…but this right here is the reason why i kneel, because of this type of treatment to young African Americans, and what makes matters worst is that it’s coming from someone who is supposed to “officiate” the game we all love….and I’ll continue to kneel

Meanwhile, in the flag-crazy town of Rosepine, people seemed to be OK with how everything went. (Did I mention their love for the flag? I’m not sure I’ve stressed how much they really love the flag. I bet when it rains on hot summer days, the guys in Rosepine take that warm, moist American flag, fold it and … You know what? I’ve probably said too much.)

The Root contacted the teams’ league, the Louisiana High School Athletic Association, via email on its website to obtain the identity of the referee and to seek comment, but didn’t hear back by time of publication.

Listen to Pen Point News interview one of the parents in attendance below:

Eyewitness of Vegas Shooting Reported a Total of Seven Shooters