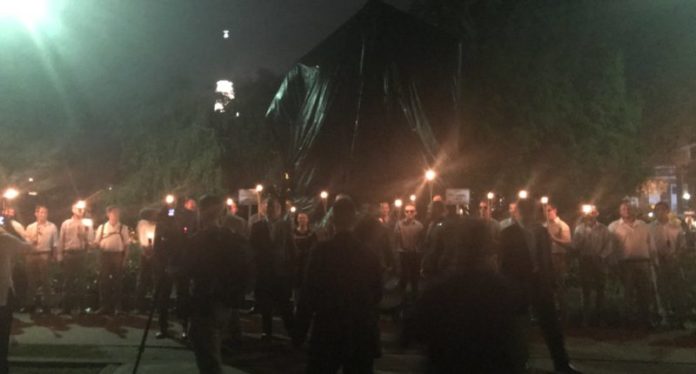 White Supremacist leader Richard Spencer led a crowd of about 40-50 supporters to the statue of Confederate general Robert E. Lee at at Emancipation Park in Charlottesville, Virginia on Saturday night.

Police stood by as Spencer and his ilk chanted “we will be back!” They soon after vacated the park, Telham tweeted.

Afterwards, Spencer took to Twitter himself to say that the rally was a “success,” and that they alt-right were “badly mistreated” in August.

Watch footage of the rally below:

White nationalists now chanting – “We will be back”. About 3 dozen supporters in Emancipation Park. Plenty of police on standby in park. pic.twitter.com/LuJEsAgxQy

The city’s mayor, Mike Signer had a beautiful message for them: “Another despicable visit by neo-Nazi cowards. You’re not welcome here! Go home!”