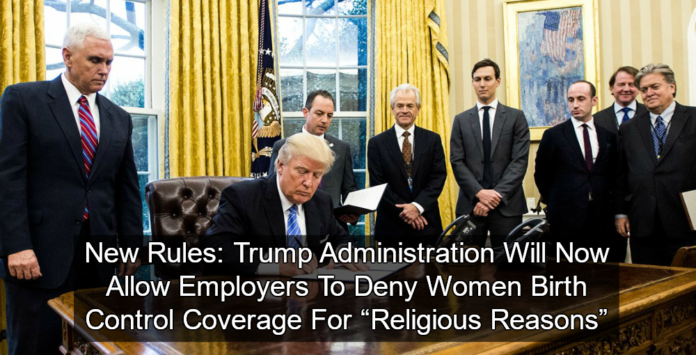 The Trump administration continues their wrath upon the reproductive rights of women. In pandering to their Christian voter base, Trump is going forward with the rolling back of the Affordable Care Act’s contraceptive mandate, which in turn “discriminates against America’s working women in the name of Christian misogyny and religious superstition.”

In pandering to their Christian voter base, Trump is going forward with the rolling back of the Affordable Care Act’s contraceptive mandate, which in turn “discriminates against America’s working women in the name of Christian misogyny and religious superstition.”

Instead of separating church and state, the President is in support of allowing employers to impose their religious belief, including religious practice on their employees- so if you’re a woman working for a religious institution who does not believe in birth control- regardless of what you believe, you are at the mercy of what that employer’s “faith” emplores them to do.

In other words, the Republican war on women is intensifying, and anti-women conservative Christian employers are now in a position to punish women who dare to claim autonomy, and seek out birth control.

In a blow to Obamacare’s controversial contraceptive mandate, employers may now have more leeway to withhold birth control coverage on religious grounds, according to new rules issued by the US Department of Health and Human Services on Friday.

The rules would let a broad range of employers — including nonprofits, private firms and publicly traded companies — stop offering free contraceptives through their health insurance plans if they have a “sincerely held religious or moral objection,” senior agency officials said on a call about the implementation and enforcement of the new rules.

We now believe the Government’s legitimate interest in providing for contraceptive coverage do not require us to violate sincerely held religious beliefs…
Immediately after the announcement Friday morning the ACLU promised that they would file a lawsuit challenging the new rules.

[The rules] basically gives broad license to employers to discriminate against their employees and withhold a benefit guaranteed by law,
We will challenge both rules as being blatantly unconstitutional. They both violate the separation of church and state and also discriminate against women by allowing employers to withhold a benefit that is guaranteed by law.

The Trump administration is forcing women to pay for their boss’s religious beliefs. We’re filing this lawsuit because the federal government cannot authorize discrimination against women in the name of religion or otherwise.
In short, Trump’s new rules represent a profound threat to the secular values upon which this nation was founded, and is yet another indication of the creeping Christian theocracy threatening the United States.

What are your thoughts on the matter? Do you think employers should be allowed to withold a health benefit which would be otherwise mandated by law, solely on the basis of religious belief?

What do you think Trump’s administration is trying to strip away next from the women of our nation?

VA Man Attacked Black Woman Because of Her Race, Then Spat On Cops –...

Goldman-Sachs Caught Manipulating US Dollar — No One Arrested, Slap On Wrist Instead –...