Home News This Man Wants You to Know What It’s Like to Be... 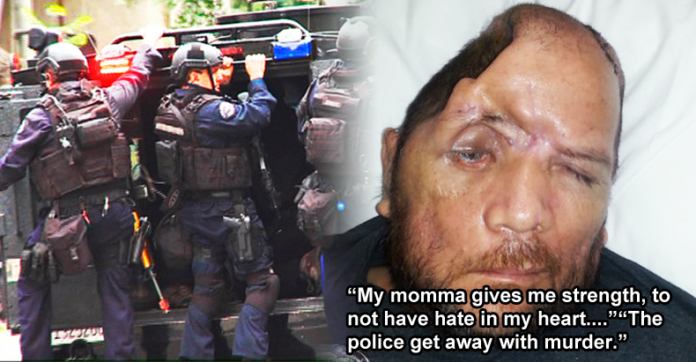 He dribbles as he speaks, has no vision or hearing on his left side, is partially deaf in his right ear and has to wear a special helmet to cover his head, which looks like a semi-flattened ball. He cannot feed himself or go to the toilet on his own. In addition to this, Walter DeLeon and his family are facing eviction.

This is a man who was normal until five months ago; he worked as a handyman and had an income.

Now, nine surgeries and a two week coma later – he is wheelchair-bound and disabled.

On June 19 he was out for a walk and all he had in his hands was a towel and a bottle of water when a Los Angeles police officer Carlos Palacios and possibly another cop shot him on Los Feliz Boulevard. In the victim’s words he was “treated like an animal”.

More painful than anything for him and his family is the fact that he should have never been targeted, shortly after the incident the single felony charge against him was dropped.

Part of the episode can be seen in a video captured from a distance by a witness; for months DeLeon was the faceless and voiceless victim.

Now that he has come out in the media to talk about his ordeal, he certainly has no intention of remaining tacit or anonymous, although neither his features nor his ability to speak are what they used to be.

He drifts in and out of sleep, sometimes his voice turns into a mumble – but he is determined to tell everyone what happened was unfair.

What happened that day?

Details of the incident are still unclear, mainly because DeLeon suffers from memory loss after the horrific shooting.

Here is what we know: he was walking on Los Feliz Boulevard on Friday evening with a towel draped over his arm. He usually carried one because he tended to sweat a lot.

Palacios and his unnamed colleague were stuck in the rush hour traffic, when he raised his hands trying to flag them down.

We still don’t know why he was trying to get their attention.

According to DeLeon’s attorney, Ben Meiselas his client was on the sidewalk between 5 to 10 feet away from the officers’ patrol car. Instead of helping him one or both of them reached for their gun and shot him in the head at least three times.

Then, as his head was gushing with blood they mercilessly tossed him back to front so they could handcuff him.

DeLeon was already comatose at this point; it is due to the bystanders’ video that we know how his limp body was treated after being shot.

Not even the medical staff expected him to survive, but he made it.

“God saved my voice so I could continue to talk,” remarks DeLeon.

He says he is telling the world what happened because he wants the police to change the way they deal with civilians.

“It’s like, wait a minute, it’s like shoot first and then ask questions later. Oh, he’s dead, he is not going to say anything. That is the model? That’s what they call ‘to protect and serve?’ Come on,” he said.

How has the family been affected?

DeLeon’s loved ones are by his side; however, it is an increasing strain on their resources to care for him.

Even moving him from one spot to another requires at least two people to lift him.

He lives with his sister Yvonna, and requires round-the-clock care.

As a result, his elderly mother has had to move into her daughter’s apartment so she can help her out. There is also a part-time nurse to help DeLeon.

Yvonna had a stable job with an events planning company, but lost it having exhausted all the leave that was granted to her so she could care for her ill brother. Her adult son, too, had to quit work because he has to spend a considerable amount of time looking after his uncle.
They have missed rent since August and are now facing eviction.

For his mother, there is nothing more painful than watching her son go through this; she cries all the time.

Yet, DeLeon is hopeful and although he wants justice to be served – he does not have any ill feelings for the officers.

“My mama gives me strength, to not have hate in my heart.”

But it is Yvonna’s words that hang in the air.

“[The police] get away with murder.”

Google Is Secretly Recording You Through Your Mobile Phone

President Trump’s Wall Will Have Worse Implications For Animals Than People – Anti Media...