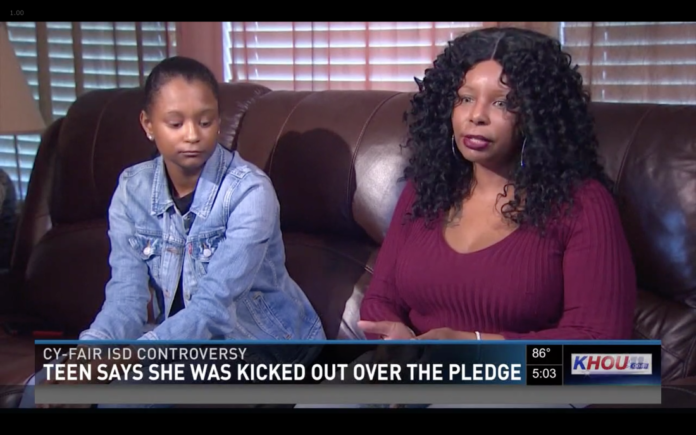 A 17-year-old in Texas has been kicked out of school for refusing to stand for the Pledge of Allegiance.

As we previously reported, some schools are misinforming and bulling students to stand for the Pledge, claiming that “it’s the law“, which is not only untrue but unethical.

For knowing her rights (which allow her to refuse to stand),  17-year-old India Landry was expelled from school, but India and her mother are not taking things lightly and are pushing back by initiating a federal lawsuit.

The lawsuit seems almost too farfetched, but the story goes like this: India had sat during the Pledge for personal reasons “around 200 times in class” without incident. But last week, she happened to be in the office of Windfern High School Principal Martha Strothers when the Pledge came over the public address system. She stayed seated. Then all hell broke loose.

The lawsuit also notes that things didn’t get any better when she awaited her ride home in Assistant Principal Penny Irwin-Fitt‘s office.

Principal Fitt told India to call her mother to come pick her up and if your mom does not get her in five minutes an officer will escort you from the building. [Secretary] Mrs. Walters said, “This is not the NFL.” Ms. Fitt said India was going to stand for the pledge like the other African-American in her class.

Days later, during a meeting between everyone involved, nothing was resolved:

Principal Strother suggested that India write about justice and African Americans being killed. Ms. Strother then said the meeting is over and if India does not stand for the pledge she cannot return to Windfern.

Conveniently, Landry was invited back to school after a local news station reported on the controversy. She has since returned to school, and true to her conviction- plans to remain seated.

The District hasn’t officially responded to the lawsuit — given the timing, it’s understandable — but a spokesperson told a reporter that the District wouldn’t do such a thing.

The district has responded with the following statement:

“A student will not be removed from campus for refusing to stand for the Pledge. We will address this situation internally.”

The school district has a policy that if you don’t say the Pledge of Allegiance, you still stand unless you have a note from your parents.

That last bit is still illegal. Nobody needs a note from their parents to remain seated during the Pledge. That said, India’s mother was going to write a note on her behalf… but said it became a moot issue after India was kicked out.

If the allegations are accurate, then pretty much everything the school did was wrong. No one has to stand for the Pledge. No one should be punished for staying seated. We’ll see how the District responds to the allegations soon.

What are your thoughts on the matter? Why do you think that schools feel that it is their job to instill forced patriotism under the guise it is illegal to dissent when the act of lying to students is is the ACTUALLY illegal act? Do you think that Landry has a foot to stand on for her lawsuit? Let us know in the comments below.

6yo Boy Kidnapped From School By Police, Locked In Psych Ward For 3 Days...