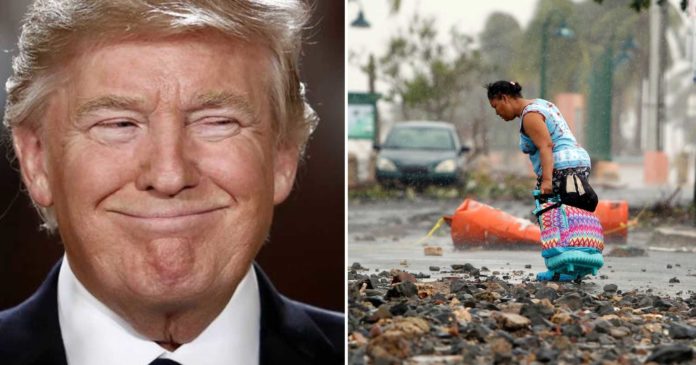 With 88% of Puerto Rico still without electricity and nearly 45% without potable water, the Trump regime today allowed its Jones Act waiver to expire, reinstituting shipping restrictions that make it more difficult to get vital aid to the American citizens struggling to recover from the devastation of a category five hurricane.

Trump shocked onlookers after Hurricane Maria ravaged the island last month by refusing to waive the Jones Act until more than a week had gone by. The law, which Trump immediately waived when hurricanes pummeled Texas and Florida, requires cargo between U.S. ports only be transported by American-made and operated vessels.

As a result of the president’s initial refusal to waive the regulation, 3,000 cargo ships, packed with vital medicine, food, and water were forced to idle off Puerto Rico’s shores as American citizens suffered and, in some cases, died.

Maddening.
3,000 shipping containers packed with food water & medicene have been sitting at the port in Puerto Rico since Saturday pic.twitter.com/LJ0ETpmnOf

Trump justified his delayed response to Puerto Rico by explaining that U.S. shipping magnates wanted to make money off the tragedy. “We’re thinking about [waiving the Jones Act],” Trump said, “but we have a lot of shippers and a lot of people that work in the shipping industry that don’t want the Jones Act lifted.”

After days of suffering and angry calls pouring in to Congressional offices, Trump finally issued a ten-day waiver that allowed aid to pour in.

Now, however those ten days have passed and Trump, who is spending his 70th day as president golfing, has allowed the Jones Act to go back into effect. The Department of Homeland Security confirmed that the waiver will not be reinstated.

A bipartisan push is underway in the Congress to have Puerto Rico permanently exempted from the Jones Act, but the snail’s pace of Capitol Hill will do little to help Puerto Ricans who are suffering today.

The people of Puerto Rico need more than lobbed paper towels from their president. They need leadership, and they need compassion. Both seem to be on very short supply in this White House.

Until He Shows Respect, We Owe Donald Trump Nothing But Resistance – Anti Media...