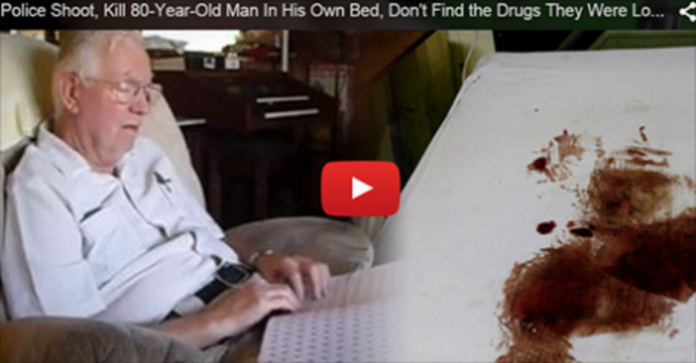 LOS ANGELES — Eugene Mallory was an 80-yr-old retired engineer who was respected and loved by his community.

He often helped his neighbors and struck up conversations to offer them the wisdom of his life experiences.

All of that came to an end early one morning as numerous officers bashed in his front door and raided his home.

Moments later, Eugene was found riddled with bullet wounds, in his bed.

This kind 80-yr-old man posed no threat to officers whatsoever, but was executed because cops thought they smelled “meth” coming from the house.

Making matters worse, police reports then claimed that they told Eugene to “drop a gun” before killing him.

But the recording of the incident reveals that that was a lie, according to reports.

Eugene actually did not charge officers with a weapon at all. He was shot and killed as he lied in his own bed, according to reports.

After opening fire on Eugene, a cop can then be heard saying “drop the gun” as if he knew he would need to cover himself in court, reports say.

Eugene leaves behind his wife and family, who believe he was unjustifiably murdered.

This is what America has become — a kind old man dying in a pool of blood in his own bed.

Individuals who decide to become cops produce little of value for society.

Any valuable services that they provide — such as investigating crimes after the fact, or directing traffic during accidents — are incidental to the true purpose for which their institution exists, and can be provided by independent organizations.

The institution of  contemporary policing exists solely to protect political rulers, whether by generating forced tribute (i.e. tickets for victimless “crimes”), invading people’s homes, shooting them and seizing their property, or by suppressing rebellion with threats and iniatory violence.

Eugene joins countless other victims of the police state, with no-knock raids now increasing to 4000% since the 1980s, and with over 5,000 Americans killed by cops since 9/11.

Watch the video below (Warning Graphic)

Texas Cop Encourages Facebook Followers to Use ‘Deadly Force’ Against Those Who “Harm” Confederate...

Shock Report: More Americans Killed by Police Since 9/11 than Soldiers Killed in War