Home News No Justice for Leon Ford as a Jury Fails to Convict the... 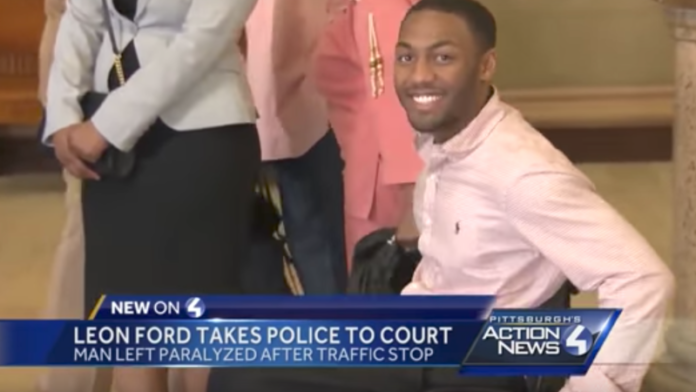 Full disclosure: I know Leon Ford. He’s a Pittsburgher and I’m a Pittsburgher, and we occasionally see each other at events and on the street. We’re also both connected to the American Civil Liberties Union; he’s on Pittsburgh’s board of directors, and I’m on Pennsylvania’s. I wouldn’t call us friends, but we’re friendly. I’m sharing this information to pre-empt any doubts about my objectivity here, because that doubt isn’t necessary.

I want to be clear that I have none.

But even if I weren’t aware of the details of Leon’s case—he was stopped for allegedly running a stop sign and speeding, suspected of being Lamont Ford Jr. (a wanted gang member) despite a license, registration and insurance card confirming his identity, pulled out of the car when officers saw a bulge in his sweats and assumed he had a gun (he did not), and shot five times when the car shifted gears during the struggle—and even if I didn’t see him, in his wheelchair, at the August Wilson Center downtown, or on East Ohio Street on the Northside, always smiling and always positive, my objectivity would still be nonexistent.

Because men like David Derbish and Andrew Miller depend on the benefit of the doubt provided by their occupation and their whiteness to intimidate, threaten, assault, rape, paralyze and kill men and women like Leon Ford, knowing that juries will refuse to convict them.

Which is exactly what happened Monday in the federal lawsuit filed against them. Miller was cleared of assault and battery, and the jury was deadlocked on Derbish’s excessive-force charges.

But it is, which is why David Derbish and Andrew Miller are free to sleep in their beds and eat dinner at their kitchen tables today, while Leon Ford is reminded that justice is conditional, arbitrary and cruel.

And if justice is conditional, arbitrary and cruel, justice doesn’t exist.

6 Plants Other than Cannabis That are High in Healing Cannabinoids – Anti Media...