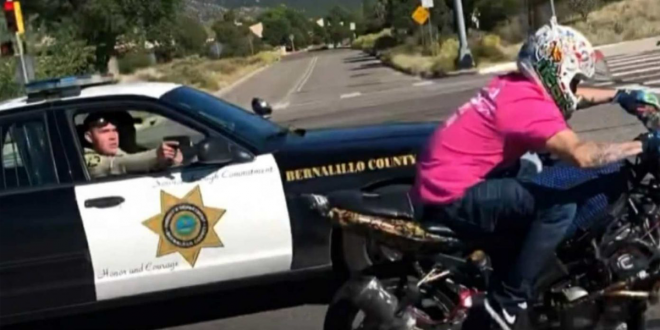 A video captures the moment a Bernalillo County Sheriff’s Deputy pulled his gun on a motorcyclist while the two are traveling down the road.

The video has surfaced on several social media platforms:

The video shows a motorcyclist doing a wheelie on Tramway Saturday afternoon when a BCSO patrol car pulls alongside him. A passenger deputy can be seen drawing his gun and aiming it at the motorcyclist as the two vehicles go through an intersection.

BCSO confirmed that is the deputy’s service weapon – not a taser. Of course either way, it would have been lethal if he actually shot while they were driving.

BCSO says deputies received several calls Saturday about a group of roughly 50 bikers racing and driving recklessly in the Heights.

Deputies say that before the video started the bikers were flashing gang signs and surrounding deputies as they tried to pull them over.

Even though the officers were safely tucked away in their car and obviously in no danger at the time, the sheriff’s office claims the deputy who pulled the gun was ‘in fear of an immediate and impending battery.’

After public outrage over what the officer did, the Bernalillo County Sheriff’s Office released this statement:

After receiving an overwhelming number of responses and messages from our community we would like to reassure citizens the incident clearly warrants further investigation. We are seeking any eyewitnesses of this incident. We are thankful for everyone’s comments and messages. Please rest assured, Sheriff Manuel Gonzales III and BCSO staff will continue to protect the rights of all citizens of Bernalillo County. Incidents like this are taken serious and a thorough investigation will be conducted.

House Passes Bill To Send Teens To Prison For Sexting Each Other – Anti...

Ireland Makes History by Becoming the First Country to Stop All Investments in the...