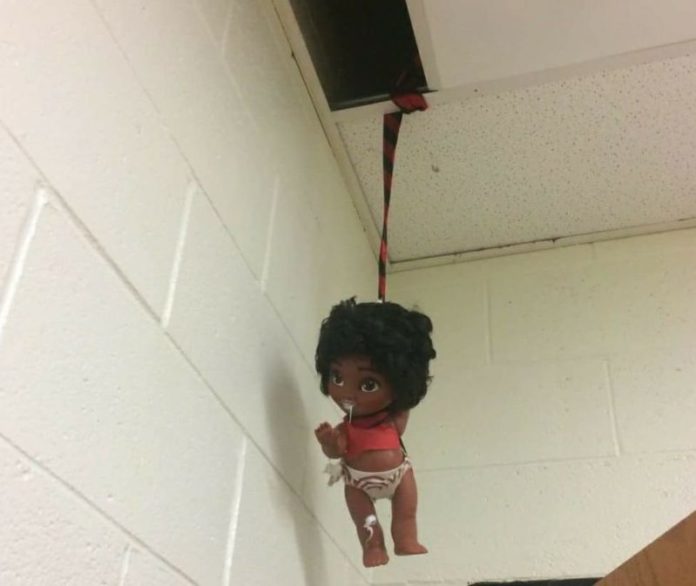 A baby black doll has been found hanged in a locker room in a Chester County,Pennsylvania high school. The superintendent claims it is simply a “foolish prank” and has nothing to do with race or racial intimidation.

The doll was found hanging from a tie from the ceiling in a locker room at Coatesville Area High School, and when the pictures circulated on social media, the superintendent, Cathy Taschner, quickly tried to shut down speculation that the incident was based on race and was a hate crime, reported NBC Philadelphia.

“After our administrators interviewed team members, both white and black, it appears that the students said this was a foolish prank and the intent was not to cause racial intimidation,” Taschner wrote in a statement to parents, staff and community members earlier this week.

Taschner said that members of the school’s cross country team had found the doll in the trash can at a meet back in September and began to play with it. After the coach took the doll away and tossed it in the trash, the members retrieved it and stuffed it into an open ceiling tile in the locker room.

“It was there for several weeks until a team member decided to use his tie to hang it down from the ceiling, where it was recently discovered, smeared with toothpaste,” Taschner added.

Taschner said that officials were first worried that the so-called “prank” was an intentional hate crime, but after speaking to team members, both white and African-American, they determined that it was just a bad prank.

“Regardless, this is foolish and offensive, and not the kind of behavior we expect or accept from our students,” Taschner said.

“We very much regret any upset and concern this incident has caused our students, staff, parents or community members,” she added. “We will use this incident as a reminder that our actions really do matter, and that we expect our Coatesville Area School District students to act with integrity at all times.”

Mark Lamont Hill Goes Off On Ex-Cop Who Says Blacks Are Prone To Criminality...