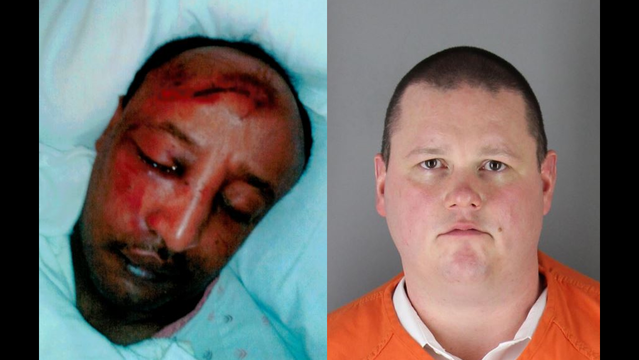 A former Minneapolis, Minnesota cop was convicted of felony assault Monday because he kicked a suspect in the face last year, causing a traumatic brain injury and breaking the man’s nose.

The jury came back with a verdict for Christopher Reiter, 36, in just 90 minutes, which Hennepin County Attorney Mike Freeman said was unusually fast, reported Fox 9.

“We think the evidence justified the verdict,” Freeman said. “All Minneapolitans, including police officers, agree this conduct is not acceptable. You don’t kick a guy on his knees, in the face, especially when he wasn’t doing anything.”

Of course Reiter’s attorney argued in court that the use of force was justified, but 3 other officers who were there at the time of the assault said it did not require deadly force, which is how a kick to the head is classified.

Mohamed Osman, the victim, was unable to return to his job as a truck driver because of persistent dizziness and headaches.

According to the original criminal complaint, he was located outside an apartment building after allegedly choking and beating a woman inside to the point of unconsciousness, though bystanders told police that Osman was on his knees and complying with police orders when Reiter, a 9-year veteran of the force, kicked him in the face, according to Fox 9.

For this felony assault that caused a traumatic brain injury to a compliant man, the standard sentencing for a cop is probation, but Freeman intends to ask for prison time for the violent ex-cop.

In a civil case, Osman is also suing Reiter and the City of Minneapolis for $4 million in damages.