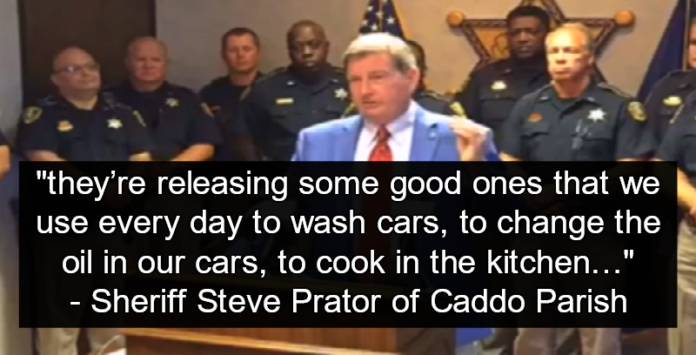 As part of Gov. John Bel Edwards’ prison reform package, Louisana is set to release 1400 prisoners on November 1st. These will be prisoners who are serving time for nonviolent, and non-sex related offenses only.

This would reduce “Louisiana’s prison population by 10 percent and scale down the parole/probation population by 12 percent over the next decade”, as well as save the state  $270 million, with 70 million going to programs geared to public safety improvement and recidivism reduction.

However, as Lousiana works through its recent prison reform, slave driver (Lousiana Sherrif) Steve Prator of Caddo Parish has voiced his disdain for losing some of his “best workers” despite all the good it will do for the state as a whole.

In a deplorable display Sheriff Steve Prator of Caddo Parish laments the fact that some prisoners will be released early after some much needed state prison reform, leaving him without the slave labor he depends upon.

In a press conference held earlier this week Prator raged against the new criminal justice reforms, while complaining about his loss of free labor provided by his virtual slaves, the prisoners:

The [prisoners] that you can work, the ones that can pick up trash, the work release programs — but guess what? Those are the ones that they’re releasing! In addition to the bad ones… they’re releasing some good ones that we use every day to wash cars, to change the oil in our cars, to cook in the kitchen, to do all that where we save money, well, they’re going to let them out!

In 38 seconds Steve Prator, Sheriff of Caddo Parish in Louisiana, tells you why he REALLY likes keeping “good” Black men in jail.

In 38 seconds Steve Prattor, Sheriff of Caddo Parish in Louisiana, tells you why he REALLY likes keeping “good” Black men in jail. pic.twitter.com/7YtxixE1rU

Reporting on the story, the New York Daily News notes:

The disgruntled sheriff was griping about the Justice Reinvestment Act, a series of 10 bills that was passed by Louisiana Legislature in June that aim to change Louisiana’s reputation as the most imprisoned state in the country.

If Sheriff Prator had these questions or reservations as this process was unfolding over a year ago, he could have taken advantage of many opportunities to participate in the process.

Sheriff Prator is not truly serving the State or its citizens who pay him with their hard earned tax dollars. He is power hungry and cares not for those he deems as “good prisoners” because if he did, he would seek for their betterment. Instead, Prator sees them as a source of labor for his modern-day slave trade and is angry that the State is scaling back his manpower.

What are your thoughts on Lousiana’s prison reform? Do you think that it will make for a safer Louisiana, and should other States follow suit? What do Prator’s statements say about the prison industrial complex?