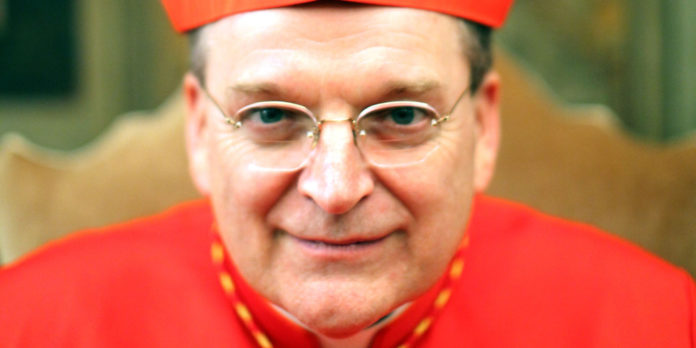 Calling gays “profoundly disordered and harmful,” the Vatican’s number two man advises parents to keep children away from gay relatives, apparently unaware of the irony of a man who protects pedophile priests from prosecution giving advice on child care.

In an interview with LifeSite News published earlier this week, Cardinal Raymond Burke, Cardinal Prefect of the Supreme Tribunal of the Apostolic Signatura and second only to Pope Francis in the Catholic church’s judicial hierarchy, said families have a responsibility to protect their children from exposure to LGBT people.

Cardinal Burke, responding to a question by an Australian family as to whether or not their gay son should be invited to the family’s Christmas celebration, said the family should shun and isolate their gay son.

Family members or not, Burke said, people who “suffer from same-sex attraction” are “inherently disordered” and their relationships are “always and everywhere wrong, evil.”

The following is an excerpt from Burke’s offensive and ignorant anti-gay remarks:

If homosexual relationships are intrinsically disordered, which indeed they are … then what would it mean to grandchildren to have present at a family gathering a family member who is living [in] a disordered relationship with another person?

If it were another kind of relationship – something that was profoundly disordered and harmful – we wouldn’t expose our children to that relationship, to the direct experience of it.And neither should we do it in the context of a family member who not only suffers from same-sex attraction, but who has chosen to live out that attraction, to act upon it, committing acts which are always and everywhere wrong, evil.

Cardinal Burke is a mean and ugly bigot, but his bigotry is church doctrine. Despite the fact that Pope Francis recently said the church must be more compassionate toward the gay community, Francis has never argued for, nor suggested changing the Roman Catholic teaching that homosexuality is “objectively disordered.”

Raping Children Shouldn’t Be A Crime, Pedophiles Are ‘Born That Way’ – Anti Media...

Video: IL Cop Kills Decynthia Clements After Discussing How Not To Kill Her

Cops Caught On Video in Donut Shop Joking about Killing People and Turning Off...