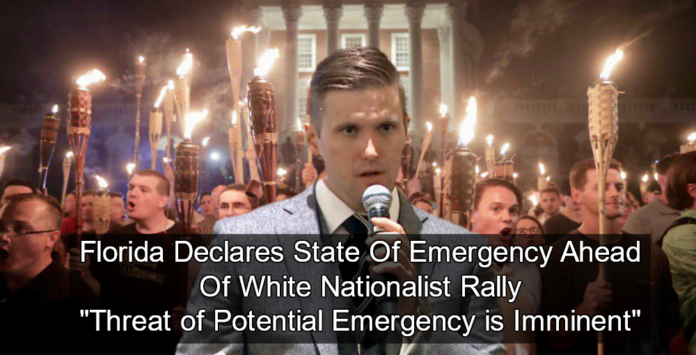 White nationalists plan to rally at the University of Florida later this week, and Governor Rick Scott is expecting trouble, so much trouble that he is declaring a state of emergency ahead of the rally which is headlined by white nationalist leader Richard Spencer.

So soon after the deadly Unite the Right rally in Charlottesville, Governor Scott is not taking any chances and prior to the state of emergency had already committed $500, 000 in funds for extra security at the Florida rally.

Now, it begs the question- when should free speech be championed, and when should hate speech be barred? The University of Florida is under fire for hosting the controversial event- but it is doing so under the guise of “supporting freedom of speech”.

Warning that the “threat of a potential emergency is imminent,” Scott declared a state of emergency in preparation for a rally featuring white nationalist leader Richard Spencer at the University of Florida campus in Gainesville on Thursday, October 19.

In a statement, Scott said:

We live in a country where everyone has the right to voice their opinion. However, we have zero tolerance for violence and public safety is always our number one priority. I have been in constant contact with Sheriff Darnell who has requested this Executive Order to ensure that county and local law enforcement have every needed resource. This executive order is an additional step to ensure that the University of Florida and the entire community is prepared so everyone can stay safe.

The white nationalists, also known as the alt-right, are a deplorable collection of neo-Nazis, Ku Klux Klan members, white supremacists and other undesirables that love Donald Trump and promote white supremacy.

Earlier this year white nationalists staged a violent riot at a “Unite the Right” rally in Virginia. The “Unite the Right” rally began as a protest of plans to remove a statue of Confederate Gen. Robert E. Lee from a city park. However, the planned protest and rally quickly degenerated into a violent riot after torch-wielding white nationalists and white supremacists marched through Charlottesville chanting “Jews will not replace us” and “white lives matter.”

Unfortunately, the “Unite the Right” rally staged in Charlottesville by white nationalists resulted in in one death and at least 19 injuries.

Prior to the declaration of a state of emergency, the University of Florida had already planned on spending $500,000 for extra security at the controversial event.

With the rally still planned to go ahead, what are your thoughts on the matter and the expenditure of half a million dollars to protect the opinions of racists and bigots? Is the school really doing the community a service, and is it doing the right thing in defending one’s right to free speech? What’s ironic is that these white supremacists want to live in a country where people have the right to voice their views, but not when the views dissent with theirs, for example, taking a knee during the national anthem.

Let us know your thoughts and leave a comment down below.