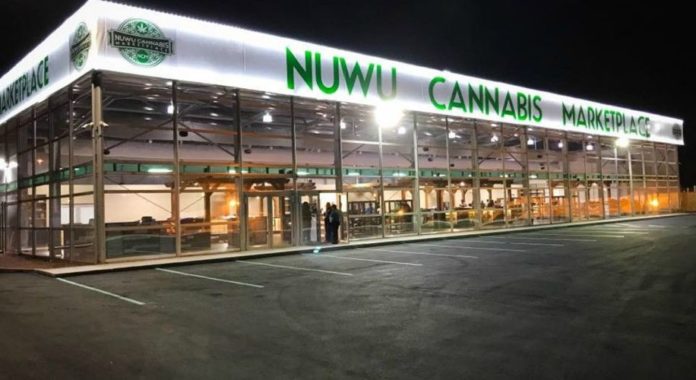 A brand new dispensary in Nevada claims that it is the “Largest marijuana store on the planet”.

While situated in downtown Las Vegas, the store is actually on tribal lands, off of Main Street and Washington Avenue.

Officials say that since the dispensary is tribe owned and self regualted, while clients will be paying the same amount of taxes on product- instead of revenue going to the state, it will go directly to the tribe who will invest it in their community.

As Adam Herbets for Fox reports:

The tribe’s chairman, Benny Tso, laughed while explaining some of the recent changes made in drug-testing policies on the reservation.

“I actually bought the first product out of our store,” Tso said. “I bought some Willie’s Reserve and Skywalker OG.”

Customer Davi Digitelli said he was so excited with the amount of merchandise that he was going straight to bed after his visit.

Other than the size, the biggest difference between most Nevada dispensaries and NuWu has to do with taxes and regulations.

“We regulate ourselves, but it’s pretty much a mirrored image of Nevada,” Tso said. “I know we’re under a microscope, so I think our regulations and our restrictions are a little bit tighter than the states… We just want to be in the business just like everybody else. We want to be fair.”

Who knows what the future holds for NuWu, but officials say that plans to establish a drive thru and service customers 24/7 are in the works.

What are your thoughts on a tribal owned dispensary? Is it something that you would support, given that revenue will go towards the betterment of the Paitue people? Let us know what you think and leave a comment below.