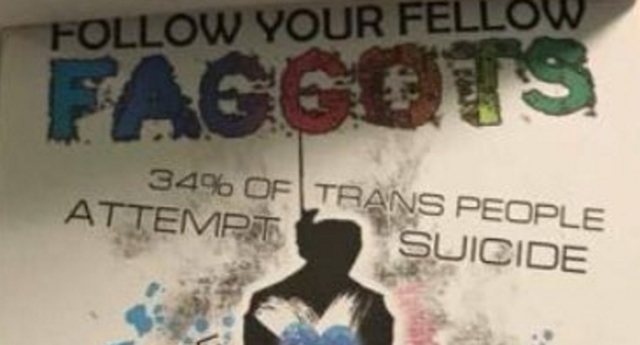 It is a well known fact that suicide amongst youth who identify as LGBTQ is comparatively higher than the general public.

With those startling statistics, in order to save lives, advocacy groups around the globe work tirelessly to get the message through to LGBTQ the youth that it does ” get better.”

Not everyone, however, want the conditions of LGBTQ to change for the better, but rather quite the opposite.

Fascists at Cleveland State University have “posted flyers at a university encouraging its LGBT students to kill themselves.” While as upsetting the message was to students, the hateful flyers are actually backed by the schools administration under the guise that it is “protected free speech”.

As reported on Pink News:

The posters have the phrase “FOLLOW YOUR FELLOW FAGGOTS” above a picture of a person with a rainbow heart being hanged and suicide statistics for LGBT people.

The posters went up in the Ohio university’s main classroom building this week, on the same day that the institution opened an LGBT centre.

Seemingly designed by a group called Fascist Solutions, they list a host of troubling statistics about how commonly LGBT people attempt or consider suicides.

“34% of trans people attempt suicide,” students are told, before the posters add that “30% of suicides are LGBT-related” and “Over 40% of bisexual people considered suicide”.

The hateful posters were condemned by local activists.

“There will never be humour in that. There is nothing funny about death.”

However damaging and dangerous the posters were- Ronald Berkman, president of the university, refused to condemn them, claiming he was a defender of free speech on campus.

Instead, he said his institute of higher education’s “foremost priority is maintaining a welcoming environment that provide opportunities for learning, expression and discourse.

“We will continue to protect free speech to ensure all voices may be heard and to promote a civil discourse where educational growth is the desired result.”

He continued: “CSU remains fully committed to a campus community that respects all individuals, regardless of age, race, colour, religion, national origin, sexual orientation and other historical bases for discrimination.”

Despite this claim, he did not criticise the shockingly homophobic flyers.

The statement called to mind Donald Trump’s assessment of the violence in Charlottesville earlier this year, which saw a white supremacist kill innocent protester Heather Heyer.

“We condemn in the strongest possible terms this egregious display of hatred, bigotry, and violence, on many sides,” Trump said at the time. “On many sides.”

Students were not pleased with their President Berkman.

“This is beyond hate speech,” one wrote on Twitter.

One student warned that hate crimes often follow hate speech, saying that “this isn’t upholding of freedom or neutrality @PresBerkman this is cowardly endorsement of violence and there will be blood on your hands”

What are your thoughts on the matter? Leave a comment in the section below to tell us ehat you think.