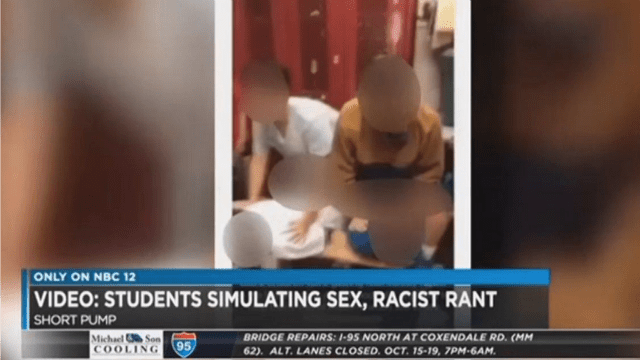 Given the current racial climate in the nation today, with white supremacy being legitimized by our own President, hate acts against people of color have been on the rise with even children as victims.

In a Snapchat video emerging out Virginia of Short Pump Middle School showing white student athletes “pinning down black students and simulating sex while shouting racist slurs at them” have left parents and school officials outraged.

Police are now investigating the October 13th incident, but advocacy groups want more- calling for a federal investigation into what really happened.

One parent described what happened as white players holding down black kids while “dry humping them” and shouting racist comments.

“What’s up with you blacks,” one student asks in the video.

Another student says, “We gonna f— the black outta these African-American children from Uganda.”

Principal Thomas McAuley has said he finds the actions in the Snapchat video “appalling, disturbing and inexcusable.” He also said he hopes to put procedures in place to keep this from ever happening again in the future.

“We will include staff, parent, administrator and student representatives in this dialogue,” his letter reads. “Our hope is to use this very unfortunate event as a meaningful learning opportunity.”

The school’s football has been made to forfeit the rest of the season as a result of the incident, but practices coming to light but will still be held with a new component:

“A mandatory component of practices will be discussions that focus on reporting responsibilities, accountability, ethics, sexual harassment and racial tolerance.”

What are your thoughts in the incident and how the school has decided to react? Do you think the decision to add mandatory discussions to their practices will make a difference? Let us know in the comments below.

Innocent Woman Calls 911 After An Accident, Cop Shows Up, Sexually Assaults and Arrests...

Russia and Iran Say They Will “Respond with Force” If Red Lines Crossed Again...