Home News Florida Court Rules Couple Not Allowed to Grow Vegetables in Their Own... 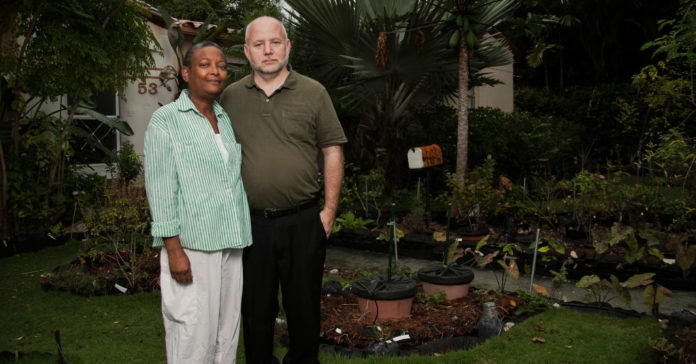 (Anti Media) A Florida couple recently lost yet another battle with their local government in their efforts to protect their right to grow vegetables in their front yard.

Hermine Ricketts and her husband Tom Carroll grew vegetables in their front yard for seventeen years, mostly because their backyard did not receive enough sunlight to sustain their garden. But in May of 2013, the local government of Miami Shores passed an ordinance banning the practice.

Though the ordinance allowed fruit, trees, and garden gnomes and flamingos to remain in front yards, vegetable gardens were outlawed. Property owners were permitted to grow them elsewhere on their property, but the ordinance asserted its right to declare vegetable gardens in the front yard unsightly. The city council claimed it was “protecting the distinctive character of Miami Shores Village.”

Within days, code enforcers came to their property, issued a citation, and threatened to fine them $50 per day if they didn’t eradicate their crops of okra, kale, lettuce, onion, spinach, and dozens of other plants. The couple could not afford the hefty fine and was forced to dismantle their garden

They pleaded with the Miami Shores Code Enforcement Board on two occasions but to no avail.

Represented by the Institute for Justice, a constitutional advocacy organization, Ricketts and Carroll eventually sued the city, kicking off a years-long battle. Last year, circuit judge Monica Gordo sided with the local government.

Gordo disagreed. Even as she acknowledged that she wasn’t sure how their garden disturbed the aesthetics of the neighborhood, she maintained the government’s right to decide what was visually acceptable.

“Given the high degree of deference that must be given to a democratically elected governmental body … Miami Shores’ ban on vegetable gardens outside of the backyard passes constitutional scrutiny,” she wrote last August.

The couple then contested her decision, taking it to an appeals court. This month, however, a three-judge panel sided with the government yet again, affirming that the ordinance is constitutional. The panel also cited “legal precedents upholding zoning regulations based on aesthetics.”

But as the Institute for Justice previously observed:

“Hermine and Tom never set out to violate the law.  The idea of making productive use of their property to grow food just seemed like a smart, economical thing to do. In Miami Shores, however, that sort of self-sufficiency—always a hallmark of the American character—is against the law.”

The Institute for Justice told Anti-Media on Monday that it is reviewing its options moving forward in fighting for Ricketts’ and Carrol’s right to grow food on their own property.

WATCH: Cop Claims Unarmed Biker Made Him ‘Fear For His Life’ So He Nearly...

Airbnb Host Ordered To Pay $5,000 And Take Asian-American Studies Class After Refusing To...