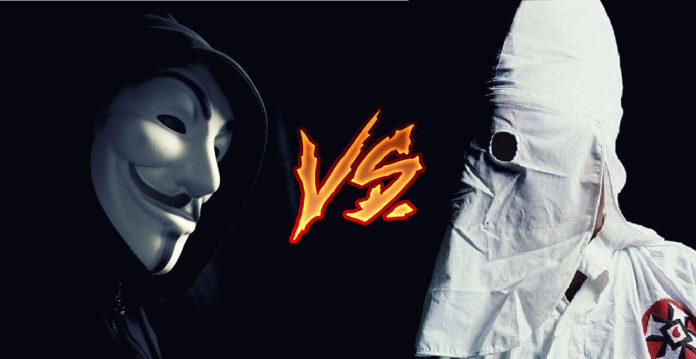 Under #OpDomesticTerrorism, various Anonymous groups from around the world have come together to battle white supremacy in the United States. As well as taking down over a dozen neo-Nazi websites, countless Twitter accounts belonging to white supremacists have been successfully shut down.

“This is simply related to ongoing events. Our message is simple, if we catch your organisation taking part in acts of domestic terrorism in the name of white supremacy, we’re coming for you.

“We’ve had plenty of Anons contribute to the operation worldwide knowing this is a U.S.-based operation; the fight against fascism is global, so we may consider expanding our operation to work with Anonymous groups in their own countries.”

Last August, Anonymous hacktivists successfully shut down the Charlottesville city website shortly after Heather Heyer’s death. The attack was carried out by the New World Hackers (NWH) who provided HackRead with the following statement:

“At the time we saw the police were not so helpful, they left the people to die which forced us to target the Charlottesville website to give them a message. New World Hackers are back, and we are delivering our own version of justice to the KKK, and government, in which ever way we please.”

These recent attacks were in retaliation to the “Unite the Right” rally organized by far-right extremists in Charlottesville, and the “White Lives Matter” rally. Attacks are ongoing.

Here is a list of the white-supremacists websites that have been shut down. As of the 20th of this month, all but three of the sites were still shut down:

We’ve reached a grotesque moment in American history where principals are relinquished in the presence of doughy-faced bigots in nerdy tweed suits. 2017 will forever be remembered as the year neo-Nazis became accepted as activists, and ethnic cleansing became a debatable topic. Some would say Anonymous’ resurgence of attacks was inevitable.