Home News 10 Reasons Why Denmark’s ‘Democratic Socialism’ Is Much Better Than America’s Crony... 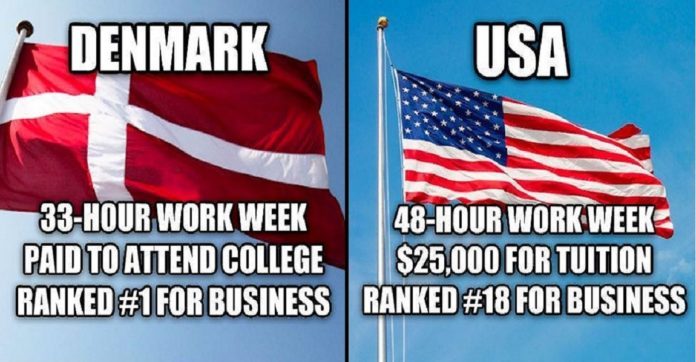 Recently, Denmark, a small Scandinavian country of 5.6 million people living in an area half the size of South Carolina, thrust into the spotlight of the US presidential race when Democratic hopefuls Bernie Sanders and Hillary Clinton sparred over whether there’s something capitalist American can learn from Denmark’s democratic socialism.

While the spotlight flattered Danish Prime Minister Lars Lokke Rasmussen, in a speech at Harvard’s Kennedy School of Government, he said Bernie was wrong to call his country socialist.

“I know that some people in the US associate the Nordic model with some sort of socialism, therefore I would like to make one thing clear. Denmark is far from a socialist planned economy. Denmark is a market economy… The Nordic model is an expanded welfare state which provides a high level of security to its citizens, but it is also a successful market economy with much freedom to pursue your dreams and live your life as you wish.”

Nonetheless, there are 10 reasons Americans should maybe dream of the Danish way:

2. Poverty rates At 6% of the population, Denmark has the 2nd lowest relative poverty rate in the OECD, well below the 11.3% OECD average. According to the US Census Bureau, the official poverty rate in the Unites States in 2014 was 14.8%. There were 46.7 million Americans in poverty.

3. Rate of employment With an employment rate of 72.8%, Denmark ranks 7th highest among the OECD countries, and above the OECD average of 66.2%. The employment rate in the US is 67%. In Denmark, any worker who worked at least 52 weeks over a three-year period, can qualify to have 90% of their original salary paid for, for up to two years. The percentage of out-of-work Americans receiving compensation from unemployment insurance is at its lowest level since the 1970s.

4. Work week Americans stay chained to their desk – an average worker puts in an average of 47 hours a week, and only takes 16 days of vacation a year. Danes work an average of 33 hours a week, and have the right to 5 weeks of paid vacation per year.5. Healthcare costs At $4400 per capita, health expenditures in Denmark are well above the OECD average of $3300. In America, National Healthcare Expenditure is projected to hit $3.207 trillion this year. The US population is currently hovering at around 320 million, so it is estimated that healthcare spending will reach $10,000 per person in 2015.

In Denmark, college is free and students are paid $900 per month to go to school, provided they live on their own. And this funding lasts up to six years. By contrast, an average US student pays over $31,000 a year in tuition to attend a private university, out-of-state residents at public universities pay $22,000 a year in tuition, and tuition costs for in-state residents at those same universities is still over $9,000.

In 2014, Forbes ranked Denmark as the best country for business. Forbes used 11 different criteria to rank countries — innovation, property rights, red tape, taxes, investor protection, stock market performance, technology, corruption, personal freedom, freedom of trade, and monetary freedom. Under the same criteria, the US ranked 18. Denmark came in No. 3 for ease of doing business in World Bank rankings of 189 countries; the United States was No. 7. 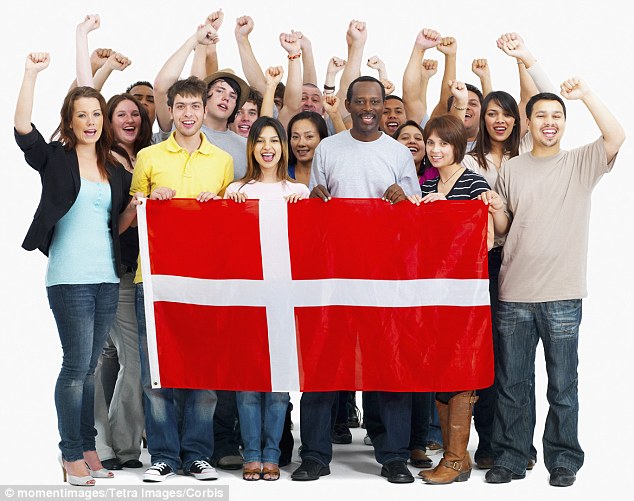 The Danish government gives new parents an average of 52 weeks — a full year — of paid time off after having a child. Those 52 weeks can be availed at their own discretion. In addition to the 52 weeks, new mothers get 4 weeks of maternity leave before giving birth and 14 weeks after. New fathers get 2 additional weeks after the birth of their child. New American parents get nothing. In the US, 1 in 4 new mothers go back to work within two weeks of having a child.

Danes save more money for retirement than Americans do. Gross national saving (which includes savings by both individuals and government) in 2013 was estimated at 24.1% of GDP versus 13.5% in the US. Danes spend about 49% of their GDP on “household consumption”. In America’s more consumption-oriented economy, household spending consumes 69% of GDP.

10. Danes Are Happier Than Americans

Denmark ranked No. 3 of 158 countries in the United Nations’ 2015 World Happiness Report; the United States was No. 15.

Denmark has a generous social safety net that comes at a cost that not all Americans might be willing to accept: high taxes. Denmark’s taxes came to 48.6% of the country’s economic output in 2013; nearly double the United States’ 25.4% that year and highest in the OECD group of wealthy countries. The average income tax rate for a single person without children is 38.4% in Denmark compared with 24.8% in the US. Denmark uses taxes and social spending aggressively to narrow the income gap between the rich and the rest. The costly model, therefore, has worked to – lower poverty, unemployment, inflation, budget deficits and national debt. Is America ready for this?