The justice system has failed again as Baltimore Police Officer Caesar Goodson Jr., who was driving the van when Gray suffered fatal spinal cord injuries in April 2015, was found not guilty Tuesday of all 21 administrative charges that were filed against him.

This verdict not only absolves Goodson of any wrongdoing in Gray’s death but also allows him to keep his job with the Baltimore Police Department, reported The Baltimore Sun.

Goodson, 48, was charged with neglecting his duty by failing to ensure Gray’s safety, including by not securing a handcuffed and shackled Gray in a seat belt and refusing to call a medic for Gray after he requested one. He was also charged with lying to investigators.

At a separate trial last year, Goodson was acquitted on all criminal charges against him. Three law-enforcement officials presided over his six-day administrative trial, and the decision to clear him of all charges was unanimous.

After the verdict was read, Sean Malone—one of Goodson’s attorneys—said: “This is a vindication of this officer. This is a tragic accident that happened, and we’re sorry for the loss of Mr. Gray, but we’re glad that our client is not going to be the face of this incident.”

The panel’s decision is final and it cannot be challenged by the city or the Police Department.

Lt. Brian Rice’s administrative trial begins Monday, and Sgt. Alicia White’s trial is set for Dec. 5. Their trials will not be presided over by the same panel that found Goodson not guilty on all charges.

The city of Baltimore previously agreed to a $6.4 million civil settlement with Gray’s family. 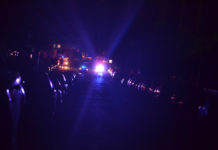 Job Offers Roll In For Ex-Prisoner Who Skipped Job Interview to Save Car-Crash Victim...

United Airlines Under Fire Again After Passenger Is Assaulted by Officers – Anti Media...