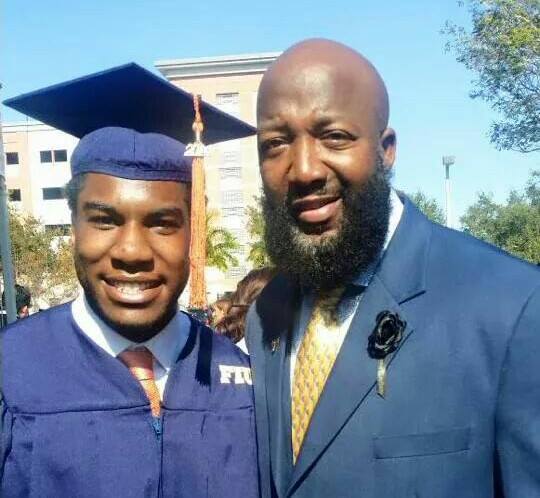 Urban Intellectuals would like to say congratulations to Jahvaris Fulton, the brother of slain Sanford, Florida teenager Trayvon Martin — an up and coming college graduate who never got to fulfill his dreams because of the sacrilegious deed of a vile and hateful racist who snuffed out his short life before he had a chance to live it.

Trayvon Martin and Jahvaris Fulton have accomplished in life more than George Zimmerman will ever do in life or in death — the highest honor of becoming REAL men of history, hope and the future, in spite of their circumstances.

Zimmerman had to take the coward’s way out and use racism and a lethal weapon to ‘prove’ his small-ish manhood to no one but himself. Now he bleeds for “self-defense insurance” (according to the latest news-who knows why they bother?) because his life is going to bleed out the very way he lived it – in anxiety for every breath he takes.

Trayvon never had to do such a thing — he didn’t even go out like a coward, he fought back before he was murdered.

Jahvaris-now a college graduate from Florida International University- will now have a fantastic future in the many MANY years to come.

Black America needs you and needs you to stand tall first for yourself, secondarily, for your brother who was cut down at the peak of his short life, and third of all, as a leading and crowning example for all of the young Black men and women in America who have and have had to overcome some of the most trying circumstances that life can bring.

Sexual Assault in the Time of Trump – Anti Media News