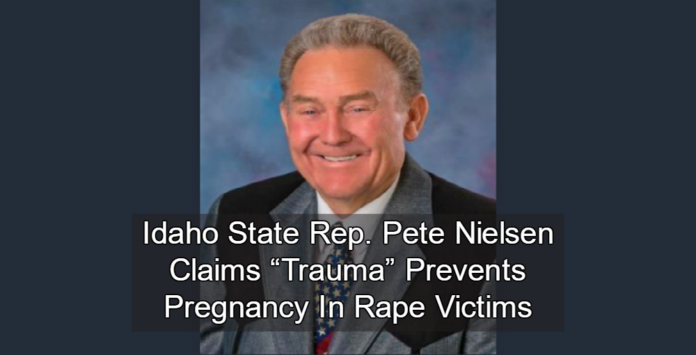 Blaming the victim: Idaho State Rep. Pete Nielsen claims a woman who is raped is unlikely to become pregnant.

The Republican lawmaker made his absurd claims while debating a bill on abortion earlier this week.

During a legislative hearing Thursday to decide whether abortion providers should be required to give patients a list of facilities that offer free ultrasounds Nielsen opined:

Now, I’m of the understanding that in many cases of rape it does not involve any pregnancy because of the trauma of the incident.

That may be true with incest a little bit.

When confronted after the hearing, Nielsen stood by his remarks, saying:

(pregnancy) doesn’t happen as often as it does with consensual sex, because of the trauma involved.

Asked how he knew that, Nielsen said:

I read a lot of information. I have read it several times. … Being a father of five girls, I’ve explored this a lot.

Nielsen’s confidence in his own absurd ignorance is almost as alarming as his original fallacious claim concerning pregnancy and rape. Clearly, the man is an idiot.

Idaho Rep. Melissa Wintrow, a Democrat, said legislators like Nielsen are ignoring science and making decisions based on conjecture:

What that kind of a statement does to somebody who’s been victimized violently – it’s ignorant, it’s insensitive.

Hannah Brass Greer, legislative director for Planned Parenthood in Idaho, said statements from politicians like Nielsen point blame at rape and incest victims who become pregnant, suggesting they must have consented to the attacks, noting:

That’s obviously, medically, scientifically inaccurate. That type of comment we’ve heard before, when politics get in the way of medical care. It’s harmful on so many levels.

Indeed, the scientific consensus is that the likelihood of conception has little if anything to do with whether or not sex was consensual. However, the claim that “legitimate rape” will not produce a pregnancy has become a standard refrain from Republican politicians.

In 2012, former Republican Missouri representative and U.S. Senate candidate Todd Akin infamously claimed that women cannot become pregnant from a “legitimate rape” because the woman’s body will “shut that whole thing down.”

In 2014, Missouri Republicans pushed for legislation that would force a woman who wants an abortion to obtain written permission from the father first, unless the woman was the victim of “legitimate rape.”

And last year, in a twisted attempt to explain why rape victims should be denied access to abortion, a Republican lawmaker in West Virginia claimed rape is “beautiful” when it produces a pregnancy.

Bottom line: It is not only inaccurate to suggest the trauma of rape prevents pregnancy, it is also cruel. The Republican war on women is alive and well. GOP lawmakers like Rep. Nielsen demonstrate over and over again that they have no respect for women, and no understanding of even the most rudimentary elements of sexual reproduction.

(H/T The Spokesman-Review, The Raw Story; Listen to audio of Nielson’s comments posted online by Planned Parenthood Votes Northwest below.)

A Dog Is Re-Elected Mayor for a Third Term, Proving Politicians Are Useless

Texas School Lies to Students- Tells Them That Standing for the Pledge Is “the...

How Corporations Nickel and Dime Their Employees – Anti Media News