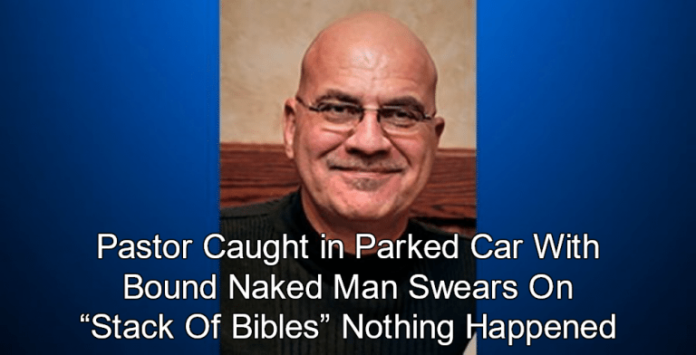 A Pennsylvania pastor is charged with lewdness and indecent exposure after being busted in a parked car with a naked and bound man.

Pastor George Gregory, the pastor at Waterfront Christian Community Church, is facing criminal charges after he and another man were found by police in a car parked on a quiet residential street.

According to reports, when the police found Pastor Gregory and his “friend,” Gregory was adjusting his clothing while Gregory’s “friend” was naked and tied-up with nylon rope.

KDKA-TV reports on the criminal complaint against Pastor Gregory:

The criminal complaint says when officers asked what was going on, Gregory told the officers that they “were just playing” and he and the other man “meet up from time to time to play with each other.”

The other man confirmed that what they were doing was consensual.

The man who reported the suspicious vehicle told police that at one point he saw the second man get out of the vehicle without any clothes on, and he was concerned because the car was parked outside his daughter’s window.

Gregory allegedly told the officers he thought they were in a private place, and when an officer said their vehicle was on a well-lit public street in clear view of several homes, Gregory told police, “I know.”

However, the Pennsylvania pastor denies any untoward conduct, and is angry about the criminal charges, telling CBS:

I was counseling a young man with a drug problem. It did turn strange, but it wasn’t my doing, OK? And I was adamant that I’m participating in that way. And so that’s when the police pulled up, and they assume things, but I’m standing by my story. It’s not true.

I won’t deny that he began to take his clothes off and propositioned me, but I will deny, on a stack of Bibles with God as my witness, that I did nothing.

Pro Tip: If you deny you did nothing, you are admitting you did something.

Writing for The Stranger, Dan Savage sums up the situation:

So… the cops either came across two men engaged in consensual bondage play (something a lot of people enjoy) in a public place where the participants might get caught (something that turns a lot of people on) and Pastor Gregory and his bondage buddy used standard-issue BDSM lingo to describe what they were doing when the police arrived (“play,” “playing,” “consensual”) or the cops caught Pastor Gregory mid-faith-based-drug-counseling session, something he does in his car late on Friday nights, and the addict he was counseling propositioned Pastor Gregory and then, after Pastor Gregory rebuffed the addict’s advances, the addict proceeded to rip off all his clothes, get out of the car to briefly air out his genitals, and then get back in the car and tie himself up in the front seat just before the police arrived.

Bottom line: A kinky Pennsylvania pastor is busted playing bondage games with a naked and bound man in a parked car on a quiet suburban street.

And so it goes.

Scientists Get The Green Light To Resurrect The Dead With Stem Cells – Anti...

Minority Elementary School Winners of Robotics Championship Told to ‘Go Back to Mexico’ –...

Milo Yiannopoulos Loses his Home to Hurricane Irma after Mocking Others Devastated by the...