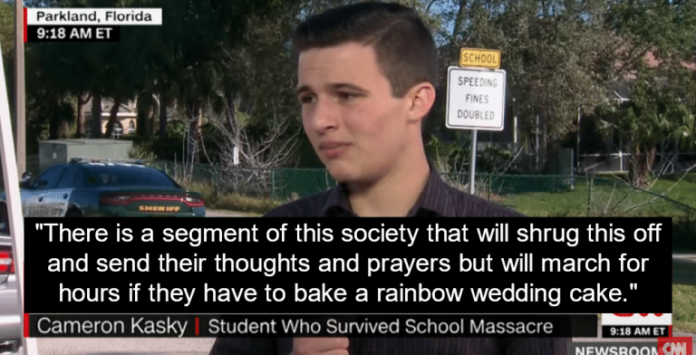 A survivor of the recent school shooting at Marjory Stoneman Douglas High School in Parkland, Florida, is speaking out, and taking aim at Republican politicians and others who only pay meaningless lip service to dead kids while going ballistic if some conservative Christian baker is asked to bake a wedding cake for a gay couple.

Do you think change is possible in terms of the kind of change you want?”

Everything I’ve heard where we can’t do anything and it’s out of our hands and it’s inevitable, I think that’s a facade that the GOP is putting up.

Kasky then called out NRA:

After every shooting the NRA sends a memo saying ‘send your thoughts and prayers.’ This is the only country where this kind of thing happens…

For those saying ‘thoughts and prayers and this is not the time to talk about guns’?

This is the time to talk about guns. There’s much more that can be done, much more that needs to be done and much more that people like Sen Marco Rubio and Governor Rick Scott are not doing. It’s scary to think these are the people who are making our laws when our community just took 17 bullets to the heart.

It feels like the only people who don’t care are the people making the laws.

There is a segment of this society that will shrug this off and send their thoughts and prayers but will march for hours if they have to bake a rainbow wedding cake.

Kasky is spot on. This is the time to talk about guns. However, Republican politicians refuse to consider even the most benign and sensible gun legislation because they are bought and paid for by the National Rifle Association, America’s premier terrorist organization.

For example, Kentucky Governor Matt Bevin is blaming video games, and not guns, for the recent Florida school shooting.

And it is not only Republican politicians who refuse to admit that guns are, by definition, responsible for school shootings. Recently Christian radio host Bryan Fischer claimed that school prayer would have prevented the Florida school shooting.

Bottom line: Kasky is right. This is the time to talk about guns. Thoughts and prayers are not required.

‘You know what else is disrespectful to our flag? Racism’: NBA Coach Steve Kerr...

Land of the Free? Man Facing Jail for Bumper Sticker of Stick Figures Having...

Unarmed Black Man Shot In The Back While Lying On The Ground, Mainstream Media...