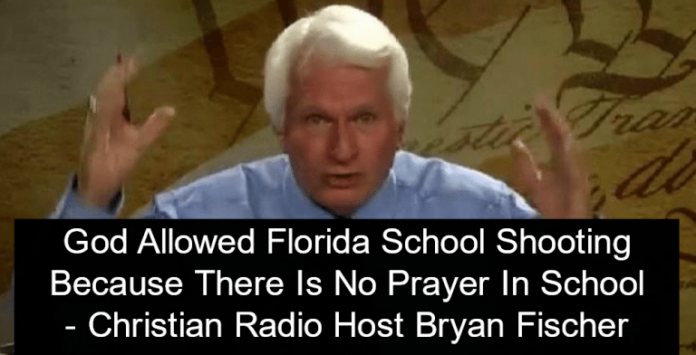 In an article for the American Family Association, Christian radio host Bryan Fischer argues that  God allows school shootings like the one that claimed 17 lives at Marjory Stoneman Douglas High School in Parkland, Florida, because there is not enough prayer in public schools. Fischer writes:

Everyone understands that prayer in school is appropriate in the wake of a tragedy like this. But if it’s appropriate after, there’s no reason it’s not appropriate before.

We have spent the last 60 years telling God to get lost from our public schools. It should come as no surprise that he’s not around when we need him. We can’t very well blame God for not coming to our aid if we fail to use the tools He has graciously given to us.

Hey, here's an idea: why don't we pray in schools BEFORE these shootings happen instead of waiting until we have dead students? Why does somebody have to die before even start talking about prayer? This is the 19th school shooting this year. What do we have to lose?

Hey, here’s an idea: why don’t we pray in schools BEFORE these shootings happen instead of waiting until we have dead students? Why does somebody have to die before even start talking about prayer?

In short, Fischer claims that school prayer could have stopped the Florida school shooting. Speaking to CBN News, Fisher defended himself from critics rejecting and mocking his claims about the power of school prayer.

Prior to 1963, there were a total of 62 deaths from school shootings in the United States. After 1963 there have been a total of 419 deaths from school shootings, from an average of about 10 a year to an average of 78 a year. And I can’t help but believe that’s it’s connected to the fact that the Supreme Court has prohibited us from any kind of formal way asking for God’s protection over our students and over our schools.

Fischer is wrong. Students are free to pray in school anytime they want. The 1963 Supreme Court decision does not prevent anybody from praying in public schools, it only prevents school officials from leading and ultimately coercing prayer as part of the public school curriculum.

More important, prayers do nothing. They are empty gestures, a kind of spiritual masturbathon: they might make the person doing the praying feel a little better, but they do nothing to effect change in the real world.

Ultimately, Fischer’s imaginary God is a small and petty deity that would refuse to protect innocent children simply because the right kind of prayers at the right time and in the right place were not being offered. How pathetic, and how sad, to place one’s faith in such a paltry and mean-spirited fiction.

Bottom line: Right on cue, conservative Christians are blaming the Florida school shooting on a lack of school prayer, while ignoring America’s perverse and irrational fetish for the gun.

And so it goes.

Monsanto is Scrambling to Bury This Breaking Story – Don’t Let This Go Unshared!