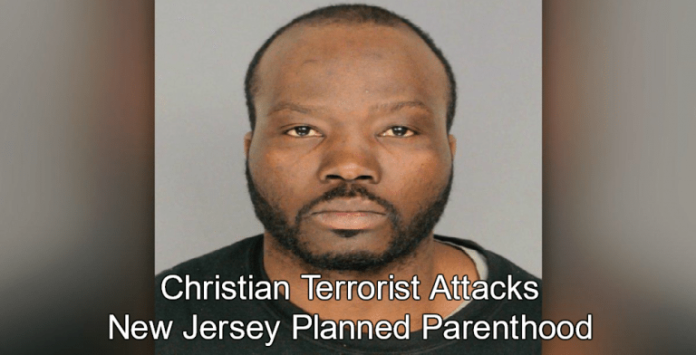 He has been charged with aggravated assault, theft and attempt to cause widespread injury and damage.

The crash sent two patients and a staff member in the wrecked lobby to a local hospital for minor injuries. The wounded have since been released.

Alcius, of Lowell, Massachusetts, was charged with attempting to cause widespread injury or damage, six counts of aggravated assault, theft and weapons offenses in the Wednesday incident at the health clinic, according to the Essex County Prosecutor’s Office.

While investigators have yet to comment on Alcius’s motive, his social media posts leave little doubt that his terrorist actions against the Planned Parenthood clinic were motivated by anti-abortion Christian extremism.

The attacker shared an article from anti-abortion group Live Action in July of last year.

Live Action is at once both a notorious and nefarious haven for deplorable, anti-abortion, Christian extremists.

McAffee also notes that Twitter users were quick to point out Alcius’s connection with anti-abortion Christian extremism. For example:

Angered by this week's truck attack against a @PPFA clinic in East Orange. At a time when women's health care is under siege, we must protect and defend safe and affordable health care access for all. https://t.co/Ef9YEfjfXs

Angered by this week’s truck attack against a @PPFA clinic in East Orange. At a time when women’s health care is under siege, we must protect and defend safe and affordable health care access for all.

Bottom line: In an act of domestic terrorism an anti-abortion Christian extremist rammed a stolen bakery truck into a New Jersey Planned Parenthood clinic, injuring a pregnant woman and two other people.

Prosecutors are asking that Alcius be held without bond until trial.