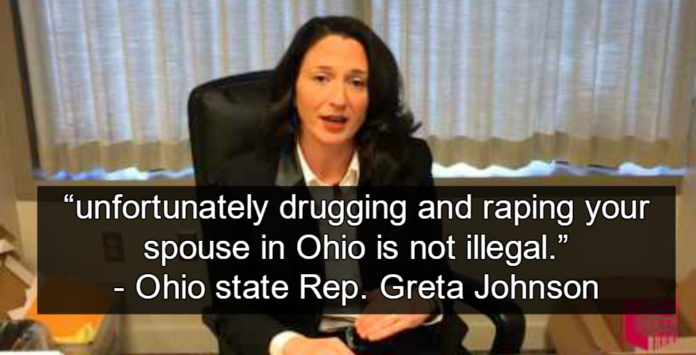 Ohio Republicans refuse to support legislation that would make it illegal for husbands to drug and rape their wives.

In Ohio, it is currently legal for a man to drug and rape his wife. To remedy this dreadful situation, state Reps. Greta Johnson (D-Akron) and Kristin Boggs (D-Columbus) introduced legislation to eliminate spousal exemptions for sex offenses, including rape and sexual battery.

The legislation fixes a real problem in the law, and should not be controversial. However, Republicans refuse to support the legislation.

Currently, Ohio is one of just 13 states which legally treat marital rape differently from other forms of rape.

In Ohio, husbands or wives can rape their spouses so long as there is no force or threat of force. The “spousal exemption” means husbands can drug and rape wives, and avoid a first-degree felony rape charge.

This loophole in the law means that prosecutors seeking a rape conviction must prove “force or the threat of force” if a spouse is attacked.

Commenting on the loophole, Johnson notes:

… unfortunately drugging and raping your spouse in Ohio is not illegal.

In a statement, Johnson, a former prosecutor herself, said:

Women and men experiencing sexual violence at the hands of their spouses should not be denied the right to seek justice just because they happen to be married to the offender.

I am appalled that there is not a larger discussion in our state about this issue. I am deeply disappointed that none of my Republican colleagues signed on as co-sponsors to this bill.

Protecting victims of sexual assault and rape should have nothing to do with partisan affiliation.

We must modernise Ohio’s laws and eradicate unacceptable policy that allows someone to commit violence against their spouse.

This is not the first time Democrats in Ohio have tried to change this despicable exception to the state’s rape laws. In 2015 Johnson introduced similar legislation that would have done away with Ohio’s “spousal exemption” for rape. But the legislation died in a Republican-controlled committee.

Bottom line: The GOP is controlled by Christian conservatives who believe women are second class citizens. In Ohio, and across the country, the Republican war on women continues. 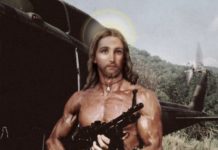 Politician Arrested For Pinching Woman’s Genitals ‘Said He No Longer Had To Be Politically...