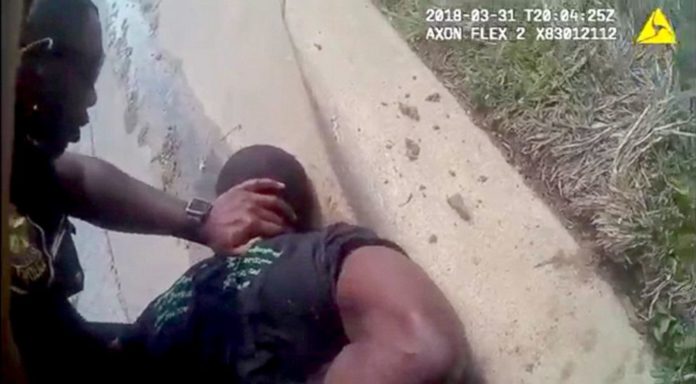 Police responded to the medical call when Curry allegedly became combative with Fort Worth Fire Department officials who were on the scene to assist with his seizure.

What police ignore and failed to mention is that, according to The American Academy of Neurology, disorientation and aggressive behavior are associated with seizures.

Fire department workers initially said Curry was drunk, and medical officials guessed he had been using K-2, synthetic marijuana. Neither are legitimate excuses to hold a man down in the street and assault him.

Bystander video was also released shortly after the incident by the Next Generation Action Network (NGAN), a community organization in the Dallas area:

NGAN led a rally on Tuesday, calling out violent Fort Worth police for this incident and others.

Curry was arrested but has been released on bond.

Curry’s attorney, Jasmine Crockett, said Curry’s head was left swollen by the punches. He also underwent brain scans to check for a concussion, but the results were not yet available.

“Unfortunately, it seems the Fort Worth Police Department has a culture of violating the rights of people of color,” Crockett said in a statement. “We will work tirelessly to determine exactly how this incident occurred and to address it in the most efficient manner possible.”

The names of the officers have not been released.

Watch the bodycam footage below via ABC News:

San Francisco Family Left Homeless After Their RV Was Towed Due To Unpaid Parking...

Radioactive Waste Flowing Freely Into Columbia River Because There’s No Money To Stop It...