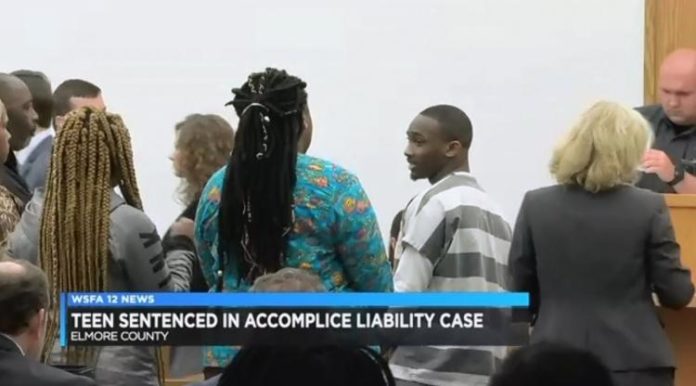 An Alabama teenager has been sentenced to 65 years in prison even though it was a police officer who fatally shot the victim.

In March, Lakeith Smith, 18, was convicted of felony murder, burglary, and theft for breaking into 2 homes in 2015 in Millbrook, Alabama. He was tried as an adult even though he was only 15 at the time of the incident, reported USA Today.

His friend, A’Donte Washington, was shot 4 times by an officer that night and killed for allegedly brandishing a gun.

Because of the strange accomplice liability law in Alabama, Lakeith was not only tried as an adult, but also charged with the killing of Washington. By this law, it does not matter that a police officer actually killed the 16-year-old.

The unnamed officer was found to be justified in killing the teen, and Smith will be paying the price for the officer’s actions.

On Thursday, Judge Sibley Reynolds of Alabama’s 19th Judicial Circuit Court gave Smith the sentence of 30 years for murder, 15 years for burglary and 10 years each for two theft convictions, to be served consecutively.

Jennifer Holton, Smith’s attorney, pointed out during the trial that Smith is being charged for a crime he did not commit, and everyone accepts that he didn’t do it.

“The officer shot A’Donte, not Lakeith Smith,” Houlton said. “Lakeith was a 15-year-old child, scared to death. He did not participate in the act that caused the death of A’Donte. He never shot anybody.”

District Attorney C.J. Robinson, the prosecutor in the case, said Lakeith smiled and laughed through the sentencing.

“I don’t think Mr. Smith will be smiling long when he gets to prison,” District Attorney C.J. Robinson said. “We are very pleased with this sentence. Because the sentences are consecutive, it will be a long time before he comes up for even the possibility for parole, at least 20 to 25 years.”

Lakeith Smith will now serve decades in prison because a police officer killed his friend. The justice system has failed us again.

DNC Just Admitted They Had The Legal Right To Rig The 2016 Primaries –...

Cheney, Rothschild, And Fox News’ Murdoch Begin Drilling For Oil In Syria — A...