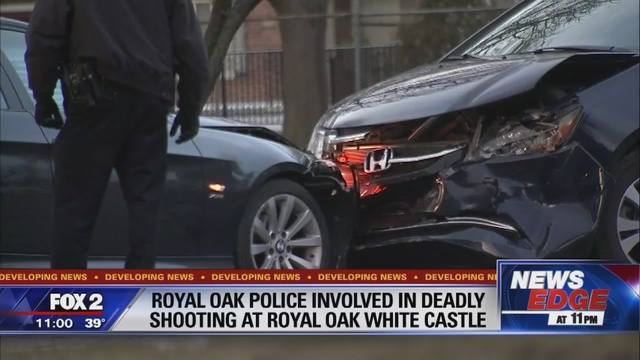 Gordon then lost the officer in traffic before returning to the same White Castle about 15 minutes later to go to the drive-thru.

The officer exited his car, which blocked the drive-thru exit, and immediately drew his gun.

“The officer approached the driver at that point, and our officer shot at the driver, striking him,” the chief said, according to Click on Detroit.

It is unclear why the officer chose to shoot the man, but Gordon drove away after being mortally wounded. He collapsed from his injuries and crashed head-on into a minivan on 13 mile road about 1/4 mile away.

No one besides Gordon was seriously injured in the incident.

Dedvukaj maintains that Gordon “did not do anything to provoke the police officer to draw his weapon, point it at him and pull the trigger four or more times, killing him.”

“We saw the cop pull up to White Castle, and we saw him get out and draw his gun immediately. We heard four or five gunshots,” said one witness. “We could see him swerving and driving really slow, and he looked out of it. And then he just started coasting into oncoming traffic, and I assumed that he passed out.”

Using witness accounts and the way the county medical examiner described the location of the driver’s wounds, Dedvukaj does not believe Gordon was any threat to the officer or anyone else. “If you look at the trajectory of those bullets, and the angle of those shots that went into the vehicle, there is no way on earth anyone was in danger, including this police officer,” he said.

The Oakland County Sheriff’s Department is investigating, and the killer is on administrative leave.

Video: Louisiana Cops Choke Man To Death After He Asked Why He Was Being...