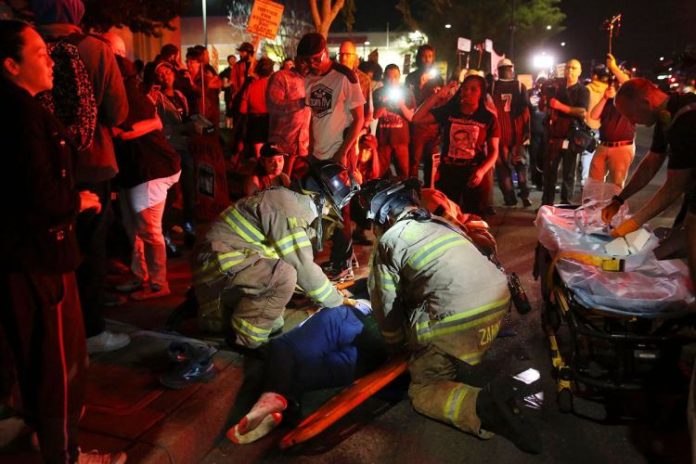 Protesters who witnessed the incident claim the deputy hit the woman at a high rate speed of speed, while authorities say the vehicle was moving slowly and justified the hit and run by claiming the deputy was responding to a dangerous situation created by some of the demonstrators, reported CNN.

Tanya Faison, founder of Black Lives Matter’s Sacramento chapter, was furious about what the deputy did to a peaceful protester.

“This is their response to a community in outrage and pain; this is ​just ​another glaring example of the ​reckless nature of Sacramento law ​enforcement,” said Faison. “We will continue to demand justice for not just Stephon, but for all lives that have been unjustly taken at the hands of law enforcement.”

According to a video from the National Lawyers Guild Legal Observers, During the Saturday night vigil, a woman walked in front of a sheriff’s vehicle and motioned the driver to stop. The deputy then struck her and drove away.

Watch the video of the incident below via The Washington Post:

Stephon Clark was shot by police while unarmed and in his grandparents back yard on March 18.  Officers shot at him 20 times, hitting him 8 times, 6 in the back, 1 in the neck and 1 in the leg, according to an independent autopsy by Dr. Bennet Omalu.

Officers claimed they thought he had a gun, but only a cell phone was found at the site of his killing.Suspicions about the officers were raised even more when the officers muted the microphones on their body cameras for a private discussion shortly after they killed Clark.