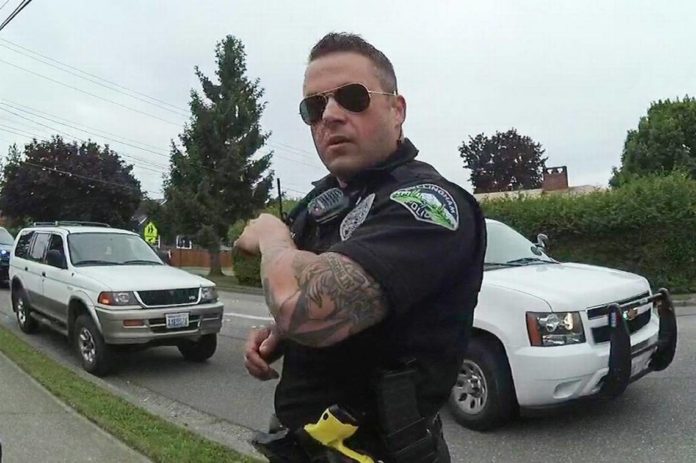 A Bellingham, Washington police officer with a disturbing history of domestic violence has been arrested again, according to Everson police.

Cpl. Brooks Owen Laughlin, 33, of Everson, was arrested in February for criminal trespassing (domestic violence), but was also arrested again on Tuesday for allegedly violating a no-contact order and stalking, both are felonies, reported The Bellingham Herald.

Laughlin’s victim contacted Everson police around 10:30 p.m. Monday night to report numerous violations of a no-contact order. The violations were said to have occurred over the past month.

The Herald reported that a no contact order was put in place after Laughlin was arrested in February after showing up at a residence in the 3700 block of Clearbrook Road looking for a woman and refused to leave.

The previous night, Laughlin allegedly threatened to murder the woman by shooting her in the face.

The Herald reported on the departments problem with abusive officers and Laughlin’s history of domestic violence:

Laughlin is the third Bellingham Police officer in as many years to be arrested for alleged assaultive behavior. The records obtained by The Bellingham Herald show Bellingham Police were made aware of Laughlin’s history of behavior in January 2017, after Whatcom County Sheriff’s deputies responded to a report of domestic violence involving Laughlin and a woman known to him.

Everson Police officers also responded to Laughlin’s home in the 1000 block of Ridge Lane at least once in the last year on a report of domestic issues, records show. Some sheriff’s deputies, and the woman’s family however, have had concerns about Laughlin’s conduct since 2015, according to records.

The Snohomish County Sheriff’s Office is conducting an investigation into the incidents. In addition, an outside independent person identified by the city’s legal office will also be conducting an assessment of the department’s specific policies that would deal with the arrests of two of its officers, and the firing of another. Bellingham Mayor Kelli Linville said the assessment will help her determine whether the department needs to look at changing its policies.

“We wish to be respectful of the investigation that Everson Police are doing, so we will not be commenting on any details of their case,” according to a prepared statement from Lt. Danette Beckley of the Bellingham PD. “We will be making a decision about the internal steps we will be taking on this matter as soon as we receive all of the information from the Everson Police Department.”

Laughlin is on paid administrative leave during the investigation.

Freedom Of Press? 6 Journalists Face 10 Years In Prison For Reporting On DC...