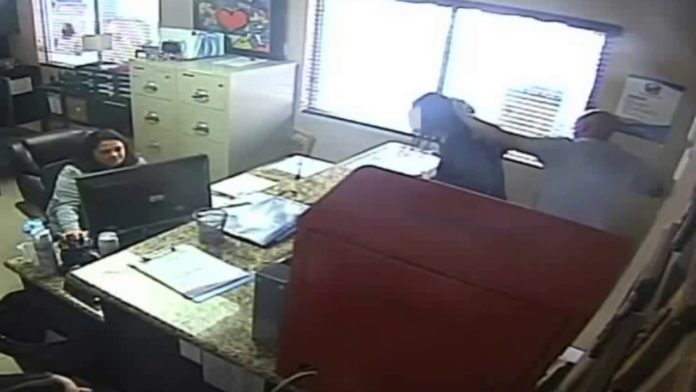 A Miami-Dade police officer was caught on surveillance video punching his 14-year-old daughter in the face, slapping her, grabbing her hair and beating her in the legs with a belt. The school employees did not even try to stop the abuse.

The video shows Miami-Dade police officer Raymond Emilio Rosario, 44, beating his his 14-year-old daughter before she sat down in the corner and cried.

Watch the disturbing video below via ABC affiliate Local 10 News.

Rosario beat the girl on March 19 at Pinecrest Cove Preparatory Academy’s main office after he received a call saying his daughter had allegedly disrespected a teacher.

Local 10 reported that Susie Dopico, the school principal, did not comment on why the employees ignored the child abuse as it happened in front of them, but did say they eventually reported the incident to the Florida Department of Children and Families.

Rosario has been arrested and charged with child abuse. He has also been relieved of duty, but will continue to receive his paychecks.

Did You Know That Government Documents Exists That Advocate Putting All Black Americans in...