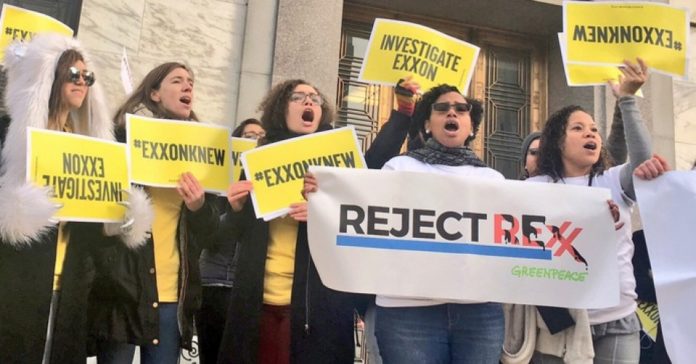 “With so many and so egregious conflicts of interest, senators should have only one real question for Rex Tillerson’s confirmation hearing: ‘Are you kidding me?’”

Pointing to Tillerson’s longtime seat at the helm of oil behemoth ExxonMobil, climate group 350.org and other environmental organizations were protesting Tillerson’s nomination both inside and outside the hearing Wednesday morning.

“We won’t allow our climate diplomacy to be in the hands of a dinosaur like Rex Tillerson,” said 350 executive director May Boeve. “By tapping Rex Tillerson as Secretary of State, Donald Trump is essentially declaring war on our planet and betting against a livable future. Tillerson would undoubtedly prioritize Exxon and its ilk above the well-being of the American people.”

Tillerson is “big oil personified,” 350 co-founder Bill McKibben wrote in a Guardian op-ed Wednesday. “All in all, it’s hard to imagine a single hire that could do more damage to the planet (though the rest of Trump’s cabinet will doubtless give him a run for his money). Making this man secretary of state rewards climate denial, further warps our foreign policy towards oil and does it at the precise moment when every bit of data screams that we should be going in the opposite direction.”

Added Carroll Muffett, president of the Center for International Environmental Law: “In Rex Tillerson, Donald Trump has nominated the one person who faces more profound and intractable conflicts of interest than Trump himself. From climate change to human rights to trade policy, Tillerson has spent his entire career advancing the interests of ExxonMobil at the expense of the American people and indeed the world. Nearly every decision he takes will affect—and potentially benefit—his oil industry allies: Is Keystone XL in the national interest? Will the U.S. deliver on its commitments under the Paris Agreement? Will the U.S. become a leader in renewables or a petro-state? This country speaks to the world through the secretary of state; is it really Exxon’s voice we want them to hear?”

“With so many and so egregious conflicts of interest,” Muffett said, “senators should have only one real question for Rex Tillerson’s confirmation hearing: ‘Are you kidding me?’”

InsideClimate News, one of the outlets that originally broke the ExxonKnew scandal, is live-blogging the proceedings.

While You Were Distracted By BREXIT And TRUMP, Monsanto’s Senate Puppets Push Through Bill...