Home News The New Travel Ban You Didn’t Hear About Is Against U.S. Citizens... 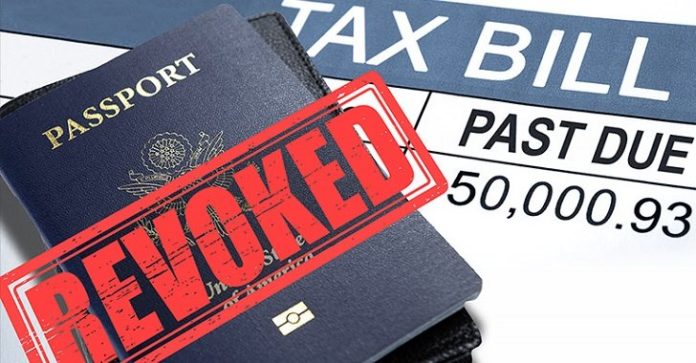 As emotions intensify over Trump’s recent immigration ban, the State Department and IRS have quietly used it as a smokescreen to roll out a new policy that targets U.S. citizens for unpaid taxes.

The passports of these individuals can now be revoked and their citizenship status undermined at the behest of one of the government’s most corrupt agencies. By granting the Internal Revenue Service control over passports, due process has been significantly undermined. The shield of protection that U.S. citizenship used to represent has transformed into an inescapable brand of ownership. The desperate financial condition of the federal government will only worsen in the future, forcing it to further consume its own people’s wealth in order to survive.

The new program is set to be implemented over the next few months, and currently only those with ‘seriously delinquent tax debt’ are in the crosshairs. An individual must have $50,000 worth of tax debt to be subject to revocation, but that number can easily be adjusted downward in the future. Once identified by the IRS, a certification is sent to the State Department to begin the process. The taxpayer is then informed of the action taken against them, but any recourse from there is extremely limited. This policy blatantly targets citizens living outside of the country who may not have filed with the IRS while earning an income abroad.

The United States is one of only two countries in the world that entitles itself to tax citizens while they work in other countries. These regulations were bolstered by FACTA legislation, which requires all foreign financial institutions to report account information on Americans. The additional risks that come with having to deal directly with the U.S. government have led many foreign banks to deny American clients altogether.

As society progresses into the next age of authoritarianism, it’s clear that control over travel is going to play a key role in the power structure. The National ID is just one sign of the changing tide and will require federal identification instead of a state driver’s license to travel. These new cards would establish a kind of ‘domestic passport’ system that would open the door to serious abuses against law-abiding citizens. The consolidation of authority into agencies like the TSA and IRS should act as a canary in the coal mine to those worried about the suppression of their freedom of movement.

The ACLU has come out strongly against this kind of control grid being established:

“Americans have long had a visceral aversion to building a society in which the authorities could act like totalitarian sentries and demand ‘your papers please!’ And that everyday intrusiveness would be conjoined with the full power of modern computer and database technology. When a police officer or security guard scans your ID card with his pocket bar-code reader, for example, will a permanent record be created of that check, including the time and your location? How long before office buildings, doctors’ offices, gas stations, highway tolls, subways and buses incorporate the ID card into their security or payment systems for greater efficiency? The end result could be a nation where citizens’ movements inside their own country are monitored and recorded through these ‘internal passports.’”

Considering all of this, the implications of Trump’s border wall should start to appear more sinister than ever to individual freedom. In the years to come, the wall could just as easily be used to keep people in rather than out.

When a country is no longer able to say who can, and who cannot , come in & out, especially for reasons of safety &.security – big trouble!

The pride that used to be associated with American citizenship created a country of opportunity for those willing to work hard, but now that pride has been replaced with a ball and chain that drags down the prosperity of those hindered by it. Tax evasion is seen by many as a crime deserving of severe punishment, but the hypocrisy of a nation like the United States claiming the moral high ground is laughable. Those who can distance themselves from the jurisdiction of bureaucrats in Washington should do so as soon as possible. America is starting to resemble the Titanic, and there aren’t enough lifeboats for the passengers. The objective now should be to avoid being pulled under the water when the $20 trillion debt bubble implodes.

(Article By Shaun Bradley of The Anti Media)

Court Says Man Owes Child Support For A Child That DNA Proves Is Not...

Indiana Reveals The Arsenal They Brought With Them To Standing Rock – Anti Media...