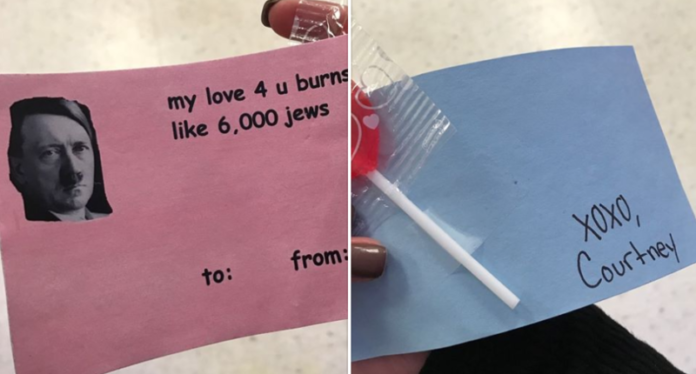 Since President Trump’s election last November, as we previously reported- hate crimes have been steadily on the rise. In the days after his election- there were 867 incidents of hate reported to the Southern Poverty Law Center with over 100 of the incidents being labeled as antisemitic. Despite Trump’s daughter Ivanka and her family being Jewish, Trump supporters have felt emboldened by Trump’s own outward bigotry that they have since been invigorated to display their own disgraceful sentiments. More recently- during a Valentines Day party held on Wednesday at The Central Michigan University College hosted by college Republicans- antisemetic cards were handed out by an anonymous member of the organization.

As reported by Elizabeth Preza for Raw Story:

In a Facebook post, the college Republicans apologized for the card, blaming the situation on “a card placed into a bag without other members’ knowledge.”

“At tonight’s College Republican meeting, we had a Valentine’s Day party, in which each member decorated a bag and other members placed valentines inside of others’ bags. Unfortunately, a very inappropriate card was placed into a bag without other members’ knowledge,” the apology reads.

A bag was then given away to students sitting in Anspach [Hall], once again without members’ knowledge of its contents. The College Republicans as an organization did not distribute this valentine. We in no way condone this type of rhetoric or anti-Semitism. We apologize for any offense, and want students to know that we do not tolerate this sort of behavior.”

Members of the group were quick to distance themselves from the hateful act, and faculty at the University have issued a statement:

In a statement, University President George Ross said while the students’ “offensive language” is protected by the First Amendment, the Valentine’s Day card “is unacceptable” and “not consistent with our values and standards.”

“We caution against concluding that the action is representative of the entire student organization or its members and remind all that threatening others as a result of such an incident can have legal consequences,” he added. “We once again urge each of our students, faculty and staff to be beacons of peace, respect, inclusivity and civility — to be role models of integrity, dignity and leadership.”

In an interview with the student paper, CMU’s College Republicans president Mackenzie Flynn denied knowledge of the card, and pointed out the bags were intended for members only.

Though intended to be seen only by members of the organization- the recipient of the card snapped a picture and shared it on social media, causing a swift and stern backlash. The following day, student activists planned to hold an anti-hate speech rally, but members of Central Michigan Action clarified that rally was “strictly to protest hate speech on campus, not any particular student group.”

The real question here is why is it that hate speech is tolerated by the university, but the action in retaliation of it is not? Why doesn’t the distribution of information making light of genocide liable to have legal consequences? If the school was really a model of “integrity, dignity, and leadership” like they pride themselves on, actions like these would absolutely not be tolerated and consequences should be handed out to the group.