Home Economy Uber Is an Employer, Employees Are Entitled to Benefits – Anti Media... 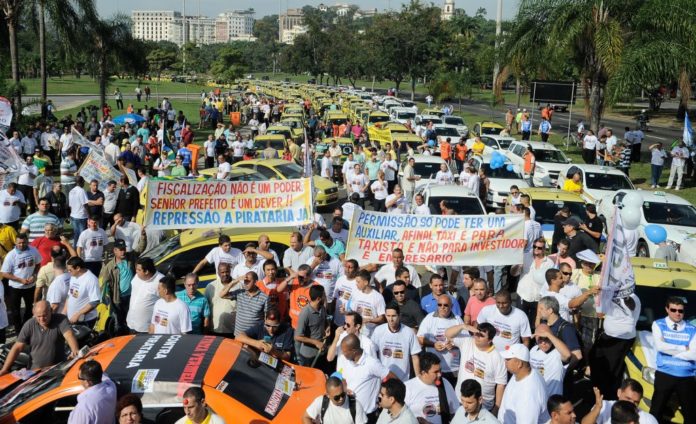 Serving 81 countries, in 581 cities around the globe, there is little to wonder why Uber is the most used ride-hailing app on Earth. While the appeal lies in its ease of use for the user, and for the driver- a quick and easy way to start earning an income, the history of Uber and lawmakers around the world is checkered at best. This is because: Uber unfairly undercuts taxi cab fares, it unfairly bypasses operating fees, has inadequate safety standards and background checks for their drivers, Uber surge pricing is a gouging tactic and many drivers have indicated that Uber has inadequate insurance. Uber circumvents these issues time and again by saying they are not an employer- but a service provider for those who whish to start their own driving business and connecting them to potential riders. However, a judge in Brazil disputes this- and has ruled that a Uber is indeed an employer and that their drivers are entitled to benefits.

As Brad Haynes for Reuters writes:

A Brazilian judge ruled that a driver using the Uber ride-hailing app is an employee of the San Francisco-based company and is entitled to workers’ benefits, adding to the global debate over labor rights for drivers on the platform.

Uber said on Tuesday it would appeal the decision by Judge Marcio Toledo Gonçalves, who issued the ruling late Monday in a labor court in Minas Gerais state.

Gonçalves ordered Uber to pay one driver around 30,000 reais ($10,000) in compensation for overtime, night shifts, holidays and expenses such as gasoline, water and candy for passengers.

The consequences for Uber, if the ruling is upheld, could be far greater if more drivers follow suit and if state and federal regulators and tax agencies start treating it, as the judge suggested, as a transportation company rather than a tech firm.

Similar cases in the United States, Britain, Switzerland, and Europe’s highest court have threatened to increase Uber’s costs and subject it to stricter regulation, with implications for peers building platforms for part-time work in the so-called ‘gig economy’.

Uber said in a statement that it was appealing the decision, citing a contradictory ruling by another labor judge in Minas Gerais two weeks ago. The company said drivers are free to set their own hours, cancel or pass on trips and use competing apps, making them service providers rather than employees.

The ride-hailing app has also raised concerns about the safety of its drivers in Brazil.

Brazil is one of the more dangerous places in the world to e a driver, without rights of a drivers union to support drivers, many are compelled to become overworked and well under compensated for their efforts. Not only this, but drivers in Brazil are able to take cash payments- making the environment even more dangerous for drivers, with the nation seeing a massive rise in attacks and even murders of service operators. “A Reuters investigation revealed a 10-fold increase in attacks on drivers, including several murders, after enabling cash payments on its platform at the end of July. Questions were raised within the company as to why it did not act faster to address the problem.”

Uber can only continue to operate so long without running into ruling like these. Not every jurisdiction is the same around the globe, and they should be expected to follow the regulations of the land. While Uber will be pushing back against the judgment in Brazil- it is sure to create a domino effect setting precedent for similar outcomes in other nations in which they operate.

What do you think about the ruling? Do you think Uber should be classified as an employer, one that needs to abide by labor laws in the jurisdiction in which they operate- or do you agree with their claim of simply being a tech company providing a platform for the self-employed to be connected to potential clientele? Your comments are always welcome in the section below.